Multimedia with FTDI - The new mikromedia for FT900 is here!

In march of 2015, MikroElektronika first announced full support for FTDI's FT90x chips. MikroElektronika released the set of compilers: mikroC, mikroPascal and mikroBasic for FT90x. Along came the development boards: the EasyFT90x, we also added the Clicker2 for FT900. The circle was almost complete, until now: the mikromedia plus for FT900 is finally out! Now we have the whole range of support covered for these super fast MCUs! 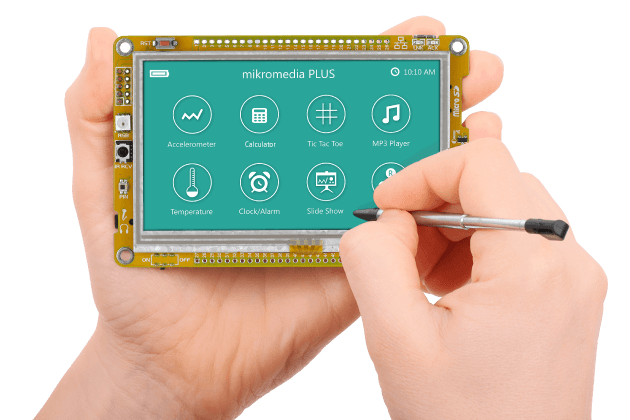 The new mikromedia for FT900

The boards main unit is, of course, the FTDI's FT900 MCU. Throughout the board, there are a couple of peripheral units attached, as with all mikromedia boards, let's go through them quickly:

There is an accelerometer - ADXL345, accessable through the I2C line, giving you exact information about the mikromedia's positioning. An audio unit with an VS1035 mp3 codec and a 3.5mm connector is there for all the audio requirements you need. A microSD card is accessable through the SD host interface for all the files you need to store on your machine. While on the topic of additional memory, there's a serial flash chip M25P80 connected on the SPI line. The Nordic's nRF24L01P is there for all the RF communication necessary to implement.

There is also a  MCP9700A temperature sensor, and a TSOP6238 infrared receiver. On the side of the board there is also an RGB LED, and a photo diode for detecting the brightness of ambient light.

The standard USB mini connector is implemented, as always. It can be used for either programming the board or implementing an USB HID module.

Of course, the MCU is also connected to the touch panel which is handled by an external FT810 chip . FTDI's FT900 is praised for it's high speed processing, which can be seen on how it handles running the display.

As with the other mikromedia boards, all these pins can be found on the sides, so that you can connect and disconnect everything however you see fit. 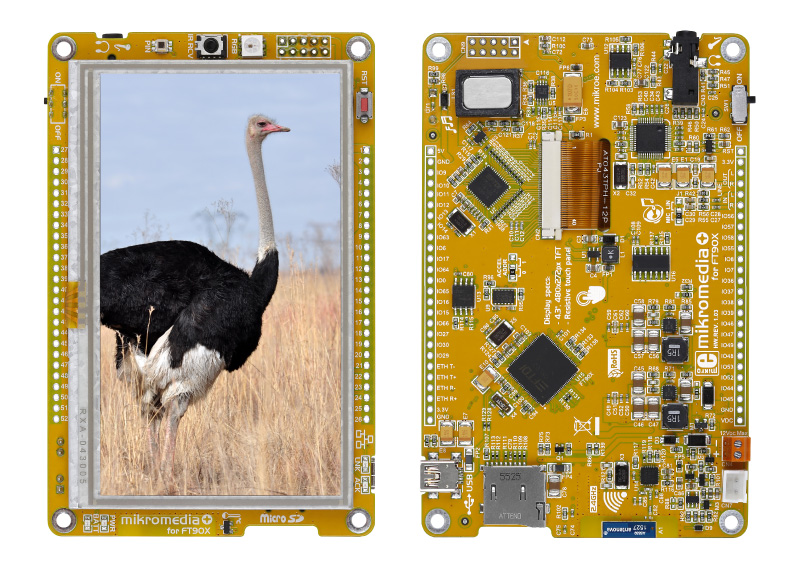 Front and back view of the new mikromedia

As all the other mikromedia boards, programming the mikromedia for FT900 can be done in two ways: using an external programmer, or with a pre-programmed bootloader. If you are unsure how exactly the bootloader works, you can check out our Bootloader tutorial.

Don't know how to use the abundant hardware found on our board? Worry not, we have all the examples ready and waiting for you. The full example, which implements all the peripheral hardware modules, can be found on the product page.

Getting started with your project

Not so long ago, our Software department released the new compiler for FT900, which is merged with the Visual TFT tool. All the projects you need to develop for the new mikromedia can be easily done in the new merged IDE. If you are not sure how to use the new IDE, you can find a tutorial here.

More information about the new mikromedia for FT900 can be found on our docs page.

Good luck and have fun!