Announced last summer, then first shown at Embedded World 2015, it is our pleasure to finally introduce the all new FT90x solution — a new set of compilers and development boards for the 32-bit FT90x microcontrollers from FTDI Chip. 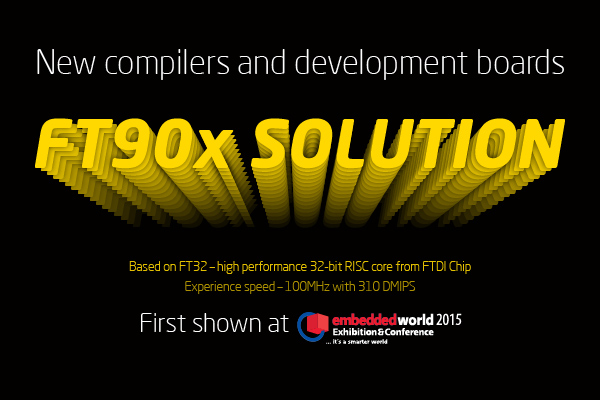 The FT90x solution comprises the complete set of compilers, mikroC, mikroBasic and mikroPascal, an EasyFT90x v7 board, a clicker 2 for ft90x board, and to tie up the software and hardware together, mikroProg for FT90x.

The FT90x solution is our fourth 32-bit offering, the other three being PIC32 and two ARM vendors. But unlike those, FT90x is a completely new architecture with a 32-bit RISC core called FT32. With FT32, FTDI Chip engineers pulled a feat not seen from any other Chip Maker. Namely, FT90x MCUs execute from Shadow RAM and are able to achieve a staggering 3.1DMIPS/MHz. That’s twice the speed of ARM cortex M4. It’s also fast enough to stream video, so it only made sense to integrate a camera parallel interface.

All this power is yours for the taking. The FT90x toolchain comes in our standard form factors you’re used to. You’ll be able to jump right into a familiar environment and instantly broaden your arsenal of development skills.

Let’s go over the tools, starting from the compilers.

There’s no use for a fast chip if it slows you down as a developer and mikroC, mikroPascal and mikroBasic for FT90x do just the opposite — they make you more productive. Out of the box, the compilers have more than 500 functions and more than 150 examples, and this is just the first release.

But it’s not just that, the compilers have some new, seemingly minor perks, that can actually make you a lot faster.

The use of wild cards in code completion is one such feature. Simple example: type *can, hit ctrl+space and you’ll get a complete list of identifiers that include CAN anywhere in their name. This is one of those hacks that don’t seem like much on paper but have a disproportionate impact on your productivity.

Then there’s EasyFT90x v7, a playground worthy of these compilers. The first “Easy” board you can take selfies with. Taking advantage of FT90x’s Camera Parallel Interface, a CMOS image sensor stares at you right from the center of the board. You can stream video directly to the onboard EasyTFT and see yourself nodding in approval as you review all the other modules. (Everything you’d expect from a seventh generation “Easy” board: onboard programmer, mikroBUS™ sockets, two Analog inputs, CAN, USB Host & device ports and so on.)

A more compact hardware counterpart to the compilers is clicker 2 for FT90x. The fast click board two seater will let you quickly build up a working gadget using the selection of any of our 100 click boards. Experiment and learn how FT90x integrates with all sorts of transceivers, sensors, displays, motor drivers.

Finally, mikroProg for FT90x is a hardware programmer/debugger in a trademark slick white casing. EasyFT90x v7 already has a mikroProg onboard, but for everything else the hardware debugger will be the most efficient way to debug your applications. It’s especially useful now in the beginning, while you’re still getting acquainted with the new architecture.

For more information on each of these boards, start from the FT90x solution page.

You may have noticed that both EasyFT90x and clicker have the identical FT900 MCU. Eight more FT90x chips are coming up, but these tools will support them when they come.

Now it’s up to you. Get on the bandwagon while it’s still early days, establish your credentials and reap the benefits when the FT90x architecture gains more prominence. There’s no reason it won’t — just read its specs from a data sheet. The least you could to is write a little MikroE history by being the first one to post something on Libstock with for FT90x.