Stepper 17 Click is a compact add-on board that contains a bipolar stepper motor driver. This board features the TB67S539FTG, a two-phase bipolar stepping motor driver using a PWM chopper from Toshiba Semiconductor. It supports a PWM constant-current control drive without a current sense resistor for motor-current detection and full-step to 1/32 steps resolution for less motor noise and smoother control. It has a wide operating voltage range of 4.5V to 34V with an output current capacity of 1.8A maximum in addition to several anomaly detection indicators. This Click board™ makes the perfect solution for small stepping motors in a wide range of applications such as office automation, commercial and industrial equipment.

Stepper 17 Click is supported by a mikroSDK compliant library, which includes functions that simplify software development. This Click board™ comes as a fully tested product, ready to be used on a system equipped with the mikroBUS™ socket.

Stepper 17 Click as its foundation uses the TB67S539FTG, a two-phase bipolar stepping motor driver with resistorless current sensing from Toshiba Semiconductor. The TB67S539FTG incorporates low on-resistance DMOS FETs, which can deliver a 1.8A maximum current with a motor output voltage rating of 40V, in addition to integrated protection mechanisms such as over-current and over-temperature detection (ISD and TSD LED indicators). It supports full-step to 1/32 steps resolution for less motor noise and smoother control, with a built-in mixed decay mode which helps to stabilize the current waveforms. 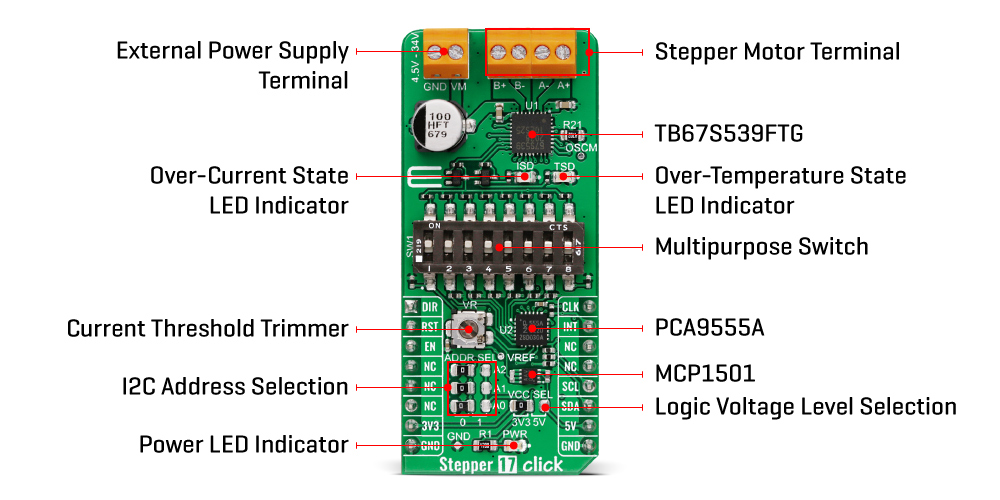 Thanks to the many steps that TB67S539FTG supports, motor noise can be significantly reduced with smoother operation and more precise control. It is suited to a wide range of applications such as office automation, commercial, and industrial equipment using stepping motors supporting an operational temperature range covering -20°C to +85°C. The current value is set by the reference voltage value obtained by the MCP1501, a high-precision voltage regulator. The current threshold point of the TB67S539FTG, alongside MCP1501, can be set manually using an onboard trimmer labeled as VR.

In addition to the I2C communication, several GPIO pins connected to the mikroBUS™ socket pins are also used to forward the information to the MCU, associated with the PCA9555A port expander. The PCA9555A also allows choosing the least significant bit (LSB) of its I2C slave address by positioning SMD jumpers labeled as ADDR SEL to an appropriate position marked as 0 and 1, alongside its interrupt feature routed to the INT pin of the mikroBUS™ socket.

A specific addition to this Click board™ is a multifunctional switch that allows the user, by selecting a particular switch, to set appropriate features such as:

This Click board™ can operate with both 3.3V and 5V logic voltage levels selected via the VCC SEL jumper. This way, it is allowed for both 3.3V and 5V capable MCUs to use communication lines properly. However, the Click board™ comes equipped with a library containing easy-to-use functions and an example code that can be used, as a reference, for further development.

This table shows how the pinout on Stepper 17 Click corresponds to the pinout on the mikroBUS™ socket (the latter shown in the two middle columns).

We provide a library for the Stepper 17 Click as well as a demo application (example), developed using MikroElektronika compilers. The demo can run on all the main MikroElektronika development boards.

This is an example application for showing Stepper 17 click ability to control motor. First, it sets default configuration, then runs motor on every turn it stops when makes a full circle and it changes direction on every iteration and on every CW movement changes step resolution.