LED Driver 14 Click is a compact add-on board that simplifies the control of multiple LEDs. This board features the BD18337EFV-M, a reliable four-channel constant current LED driver from Rohm Semiconductor. It is powered by an external power supply in the range of 5.5V to 20V, providing a maximum output current of 150mA per channel. The BD18337EFV-M also comes with the possibility for up to 3 LEDs in series on its output OUTx pin and built-in energy sharing control, selectable operational mode, and multiple built-in protection functions that protect the circuit during abnormalities. This Click board™ is ideal for LED rear lamps (turn/stop), fog lamps, and turn signals for automotive applications.

LED Driver 14 Click is supported by a mikroSDK compliant library, which includes functions that simplify software development. This Click board™ comes as a fully tested product, ready to be used on a system equipped with the mikroBUS™ socket.

LED Driver 14 Click as its foundation uses the BD18337EFV-M, a four-channel constant current LED driver with built-in MOSFET ideal for LED rear lamps (turn/stop), fog lamps, and turn signals for automotive use from Rohm Semiconductor. The BD18337EFV-M incorporates a proprietary thermal dissipation circuit and individual LED control function to drive LED lamps with different specifications by one driver, allowing the possibility for up to 3 LEDs in series on its output OUTx pin. It also has integrated protection circuitry to guard against output-short, overvoltage, LED short-circuit protections, and overtemperature. 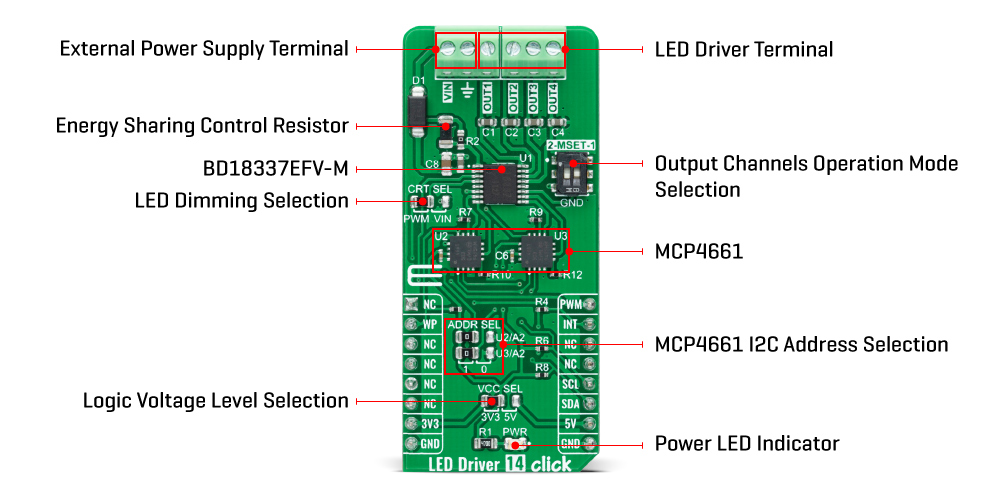 This Click board™ provides an output current of 150mA per channel with an output current accuracy of ±5%, limited by two MCP4661 digital potentiometers from Microchip Technology, which establishes communication with the MCU via I2C serial interface. The MCP4661 also allows the choice of the least significant bit (LSB) of its I2C slave address by positioning SMD jumpers labeled as ADDR SEL to an appropriate position marked as 1 and 0. The MCP4661 also has a configurable Write Protection function labeled as WP routed on the RST pin of the mikroBUS™ socket, which protects the entire memory and all registers from write operations and must be set to a low logic state to inhibit all the write operations.

The BD18337EFV-M offers two ways to implement LED dimming: analog dimming and PWM dimming. Both methods control the average current flowing through the LEDs. The analog dimming can be achieved by adjusting the LED current by using an external voltage source on the VIN terminal, while the PWM dimming is implemented by direct control of the dimming control signal routed to the PWM pin on the mikroBUS™ socket. The selection can be made by positioning the SMD jumper labeled as CRT SEL to an appropriate position marked as PWM or VIN.

This board also has a two-channel switch labeled as MSET, which allows changing output channel operation mode based on detecting an LED error. It also uses the INT pin of the mikroBUS™ socket in two ways, used as a ‘fault’ indicator which immediately notifies the host when a fault condition occurs or as an input that disables the output current. The output channel operation mode is automatically selected according to a switch position. More information about these selectable modes can be found in the attached datasheet.

This Click board™ supports an external power supply for the motor, which can be connected to the input terminal labeled as VIN and should be within the range of 5.5V to 20V (typically about 12V). This wide range can lead to significant device power consumption in applications where a high input voltage is applied to the device, and the output is relatively low. This amount of power can increase the BD18337EFV-M internal temperature to an unacceptable level depending on the package's thermal resistance. The BD18337EFV-M employs an Energy Sharing Control to solve this issue, which dissipates the extra power that can overheat the device in external resistors R2 and R3 (R3 is unpopulated by default configuration).

This table shows how the pinout on LED Driver 14 Click corresponds to the pinout on the mikroBUS™ socket (the latter shown in the two middle columns).

We provide a library for the LED Driver 14 Click as well as a demo application (example), developed using MikroElektronika compilers. The demo can run on all the main MikroElektronika development boards.

This example demonstrates the use of LED Driver 14 Click board™ by controlling the brightness of LEDs by changing the PWM Duty Cycle.