ISM Click is a compact add-on board that contains a complete wireless RF digital data transceiver. This board features the RFM75, a low-power, high-performance 2.4GHz GFSK transceiver from RF Solutions. The RFM75 transceiver is configurable through SPI serial interface and operates with only 3.3V in the worldwide ISM frequency band from 2400MHz up to 2527MHz. The embedded packet processing engines enable their entire operation with a simple MCU as a radio system. Burst mode transmission and up to 2Mbps air data rate make it suitable for applications requiring ultra-low power consumption. This Click board™ is ideal for home appliances, remote control applications, consumer electronics, and many more.

ISM Click is supported by a mikroSDK compliant library, which includes functions that simplify software development. This Click board™ comes as a fully tested product, ready to be used on a system equipped with the mikroBUS™ socket.

ISM Click as its foundation uses the RFM75, a low-power, high-performance 2.4GHz GFSK transceiver operating in the worldwide ISM frequency band from 2400MHz up to 2527MHz from RF Solutions. The RFM75 operates in TDD mode, either as a transmitter or as a receiver. Burst mode transmission and up to 2Mbps air data rate make it suitable for applications requiring ultra-low power consumption. The embedded packet processing engines enable their entire operation with a simple MCU as a radio system. Auto re-transmission and auto acknowledge giving reliable link without any MCU interference. 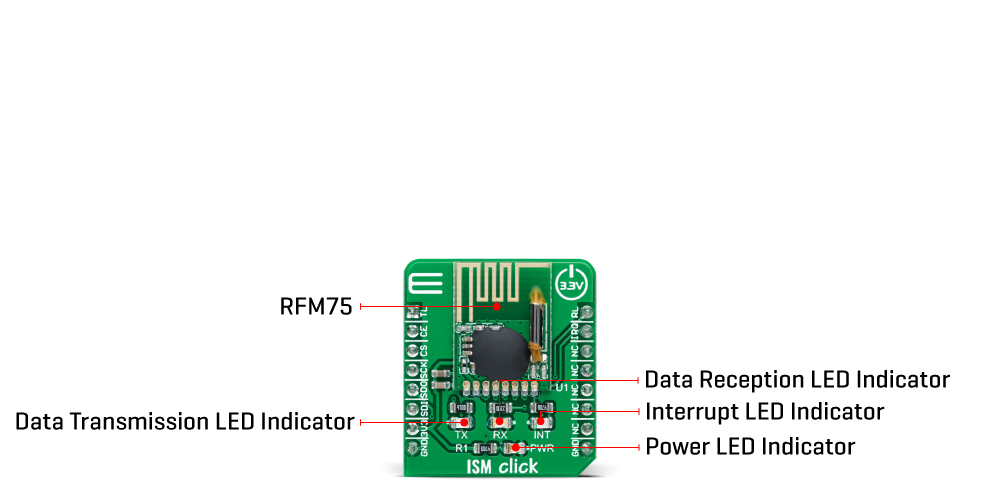 ISM Click communicates with MCU using the standard SPI serial interface that operates at clock rates up to 8 MHz. In power-down mode, RFM75 is in Sleep mode with minimal current consumption. SPI interface is still active in this mode, and all register values are available by SPI interface. This Click board™ also has a yellow LED indicator routed on the INT pin of the mikroBUS™ socket (provide the user with feedback after a successfully received package) and chip-enable function routed on the RST pin of the mikroBUS™ which activates TX or RX mode of the RFM75. Besides, it also has two additional LED indicators, a red and blue LED routed on the AN and PWM pins of the mikroBUS™ socket. The user can use it for visual indication when sending or receiving data.

This table shows how the pinout on ISM Click corresponds to the pinout on the mikroBUS™ socket (the latter shown in the two middle columns).

We provide a library for the ISM Click as well as a demo application (example), developed using MikroElektronika compilers. The demo can run on all the main MikroElektronika development boards.

This library contains API for the ISM Click driver. This example transmits/receives and processes data from ISM clicks. The library initializes and defines the UART bus drivers to transmit or receive data.