Excelon-Ultra Click is a compact add-on board that contains the most reliable nonvolatile memory. This board features the CY15B116QSN, a high-performance 16-Mbit nonvolatile memory that employs an advanced ferroelectric process from Infineon Technologies. A ferroelectric random access memory (FRAM) is nonvolatile, performs reads and writes through SPI commands, and provides reliable data retention for 151 years while eliminating the complexities, overhead, and system-level reliability problems caused by serial Flash and other nonvolatile memories. This Click board™ is suitable for all applications that require fast access and high reliability of stored data, and unlimited endurance.

Excelon-Ultra Click is supported by a mikroSDK compliant library, which includes functions that simplify software development. This Click board™ comes as a fully tested product, ready to be used on a system equipped with the mikroBUS™ socket.

Excelon-Ultra Click as its foundation uses the CY15B116QSN, a high-performance 16-Mbit nonvolatile memory that employs an advanced ferroelectric process from Infineon. The memory array is logically organized as 2,097,152 × 8 bits and is accessed using an industry-standard serial peripheral interface (SPI) bus. The CY15B116QSN combines a 16-Mbit F-RAM with the high-speed Quad SPI SDR and DDR interfaces which enhances the nonvolatile write capability of FRAM technology. 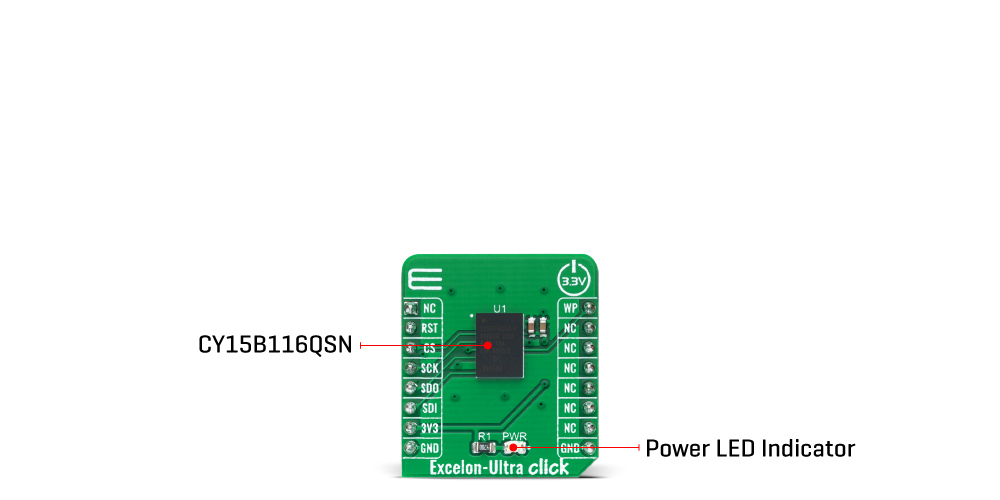 The key differences between the CY15B116QSN and a serial flash are the FRAM’s superior write performance, high endurance, and lower power consumption. The CY15B116QSN is ideal for nonvolatile memory applications, requiring frequent or rapid writes. Examples range from data collection, where the number of write cycles may be critical, to demanding industrial controls where the long write time of serial Flash can cause data loss.

Excelon-Ultra Click communicates with MCU using an industry-standard SPI interface supporting the two most common modes, SPI Mode 0 and 3, with a maximum frequency of 108MHz. Data is written to the memory array immediately after each byte is successfully transferred to the device. The following bus cycle can commence without the need for data polling. It supports 1e14 read/write cycles, or 100 million times more write cycles than EEPROM. In addition, the CY15B116QSN offers substantial write endurance compared to other nonvolatile memories.

Furthermore, this Click board™ provides additional hardware-controlled functions. The configurable Write Protection function, routed on the PWM pin of the mikroBUS™ socket, protects all registers (including status and configuration) from write operations when SRWD bit (SR1[7]) is set to ‘1’. The WP pin must be held high to inhibit all the write operations to registers. When this pin is high, all memory and register writes are prohibited, and the address counter is not incremented. Also, it has a Reset feature routed to the RST pin on the mikroBUS™ socket, which with a low logic level, puts the CY15B116QSN into a Reset state, and with a high level operates module normally.

This table shows how the pinout on Excelon-Ultra Click corresponds to the pinout on the mikroBUS™ socket (the latter shown in the two middle columns).

We provide a library for the Excelon-Ultra Click as well as a demo application (example), developed using MikroElektronika compilers. The demo can run on all the main MikroElektronika development boards.