BroadR-Reach click brings the industry grade communication standard to the mikroBUS™, which is built to be used in an Ethernet-based open network. The click board is equipped with the BCM54811 Transceiver from Broadcom Limited, which is used to provide the hardware PHY layer for the network, and the W3150A+ from WizNet, a hardware LSI protocol stack, that provides an easy and low-cost solution for high-speed Internet connectivity for digital devices by allowing simple installation of TCP/IP stack in the hardware.

BroadR-Reach click brings the industry grade communication standard to the mikroBUS™, which is built to be used in an Ethernet-based open network. The click board is equipped with the BCM54811 Transceiver from Broadcom Limited, which is used to provide the hardware PHY layer for the network, and the W3150A+ from WizNet, a hardware LSI protocol stack, that provides an easy and low-cost solution for high-speed Internet connectivity for digital devices by allowing simple installation of TCP/IP stack in the hardware.

BroadR-Reach® point-to-point Ethernet PHY technology was developed by Broadcom Limited. BroadR-Reach® technology is a robust Ethernet physical layer interface, designed for use in noisy environments and harsh conditions, such as in industrial networking applications. This technology allows multiple systems to simultaneously access information over the unshielded single twisted pair cable, reducing connectivity costs and cabling weight. As such, it offers a great alternative to older, rather limited standards used so far, and enables faster data rates to be transferred over the existing cable networks.

BroadR-Reach® can be used to establish full duplex Ethernet-based connectivity for applications at 100Mbps over a single, unshielded twisted pair cable. This is possible because of the used signal modulation. These attributes make this communication standard robust and immune to interference and as such, it is an ideal solution for industrial network applications or networks in any other areas with a lot of electromagnetic interferences (EMI).

BroadR-Reach click uses the physical layer IC, also known as the PHY, labeled as BCM54811 and produced by Broadcom. This IC is used for transmitting and receiving the signal on the network, on a physical level. The BCM54811 IC on click board is configured by a small, eight pin PIC16F18313 microcontroller, to work with the BroadR-Reach® communication standard. This onboard microcontroller also sets the BroadR-Reach® Master/Slave configuration, as well as the operating mode of 10Mbps/100 Mbps. The desired communication and operational mode can be selected by two small DIP switches on the click board. For more information about the position of the switches, refer to the Onboard settings and indicators table, below. 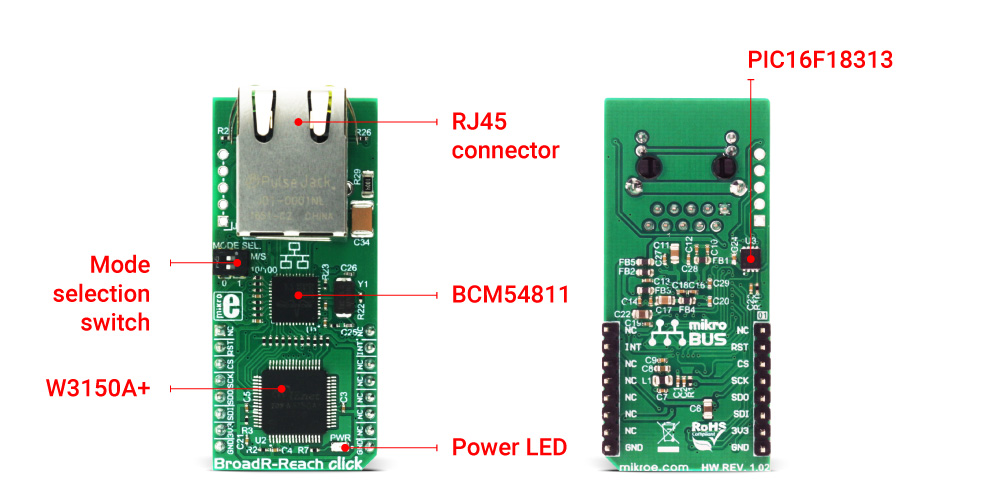 BroadR-Reach click has been designed to demonstrate and test 10 Mbps BroadR-Reach and 100 Mbps BroadR-Reach connectivity. However, the BCM54811 as a device is a triple-speed 10/100/1000BASE-T Gigabit Ethernet (GbE) transceiver. In addition to 10Mbps and 100Mbps BroadR-Reach connectivity, the transceiver can support 1000BASE-T, 100BASE-TX and 10BASE-T on standard Category 5 UTP cable. The 10BASE-T Ethernet can also run on standard categories 3, 4, and 5 UTP. The BCM54811 is designed to exceed IEEE specifications for noise cancellation and transmission jitter, providing consistent and reliable operation over the broadest range of existing cable infrastructures. Depending on the cable type used, it can reach up to 300m at 100Mbps or 500m at 10Mbps. The BCM54811 is fully compliant with the RGMII and MII interface specifications, allowing compatibility with industry-standard Ethernet MACs and switch controllers.

MikroElektronika provides libraries that help with the development of own application, by simplifying the communication between the MCU and the W3150A+ and thus, speeding up the firmware development.

This table shows how the pinout on BroadR-Reach click corresponds to the pinout on the mikroBUS™ socket (the latter shown in the two middle columns).

We provide a library for the BroadR-Reach click on our LibStock page, as well as a demo application (example), developed using MikroElektronika compilers. The demo can run on all the main MikroElektronika development boards.

BroadR-Reach click library contains basic functions for controlling the click board, but also the advanced functions, which abstract basic operations to a simple send or receive functions.

This click board is supported with mikroSDK, the MikroElektronika Software Development Kit. To download mikroSDK visit LibStock. For more information about SDK, visit the official page.