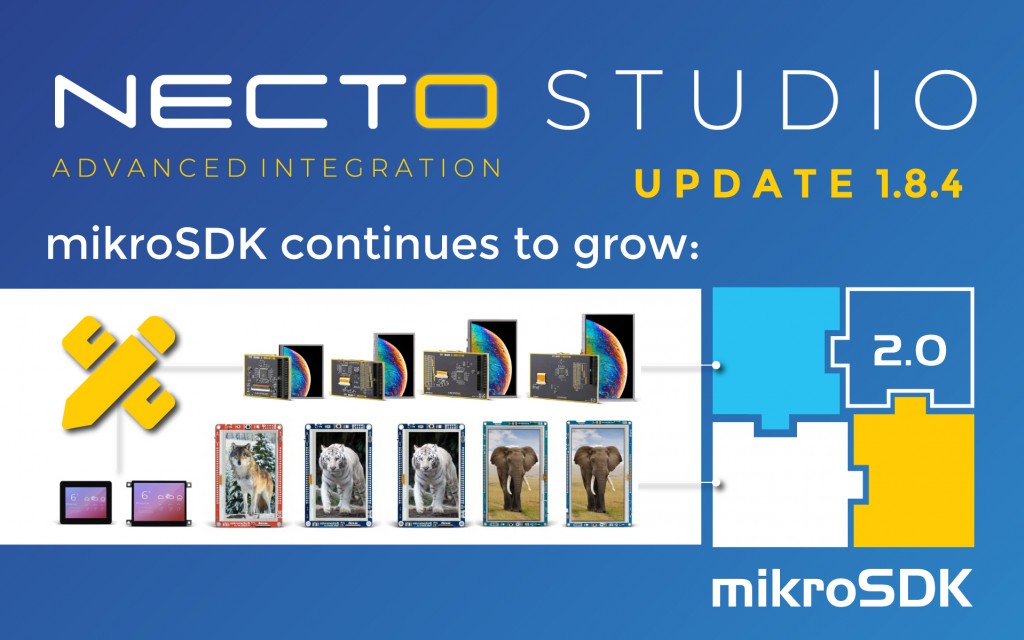 The multi-architectural software development kit - mikroSDK is getting a brand new update. The designer now has additional displays to work with. Resistive display support has been added. Amongst other, 11 new hardware definitions have been added as well.

Here is a list of new features and improvements this update brings:

As of this version, resistive displays are officially supported in mikroSDK v2. The added TFT display modules support up to 24-bit pixel format (RGB: 888) and resolutions of up to 800 x 480 pixels. They feature an excellent contrast ratio and uniform brightness. TFT Board Resistive line of products are supported by NECTO’s Designer, a software tool for simplified development of visually oriented embedded applications powered by mikroSDK v2.

For a full list of all changes, please have a look at the following document.

mikromedia Plus for PIC32MX7

mikromedia Plus for STM32

mikromedia Plus for STM32F7

Official support for ST’s STMPE610, STMPE810 and STMPE811 resistive touch controllers has been added. You now have the option to expand your projects even further. Simply create another setup with the newly added display board and your code will be good to go. Support for TI’s TSC2003 touch controller has been implemented ( source added and tested ), but will be officially added in the NECTO build process later.

The newest NECTO release with mikroSDK v2.4.0 brings you a major update to an already amazing SDK package. NECTO Studio and mikroSDK now also supports 11 additional hardware. For a detailed list of all newly added hardware, please have a look at the documentation.

Connector definitions for mikromedia shields have been added. Now it’s easier than ever to access the pins you want to without looking at the schematics. Simply type in the desired connection and you’re good to go. This additionally simplifies accessing one of our 1000+ Click boards™ examples which use mikroBUS™ connections.

High-speed ADC module is now fully supported for all MKV5x MCU’s. High-speed ADC (HSADC) adds faster and more precise measurements to any project. And fret not, if the pin has the ability to operate with the HSADC, mikroSDK will select it and set everything up for you. Instead of reading numerous pages of the datasheet, let the mikroSDK setup everything for you and add HSADC functionality to your project today!

Low-level Mikroe implementations have been further optimized by removing some of the unnecessary handle checking. Effectively, this results in a much more stable, optimized, and faster code. This is just one of the few updates. For more information, check the official CHANGELOG file on our GitHub repository.

Automated build script has been updated. Script now writes adequate progress level based on run settings. These updates provide a better overview of the current build progress and better control in general.

For a full list of changes, please take a look at the following document.