BATT-MON 4 Click is a compact add-on board representing an advanced battery monitoring solution. This board features the LTC3337, a primary battery state of health (SOH) monitor with a built-in precision coulomb counter from Analog Devices. The LTC3337 is designed to be placed in series with a primary battery with minimal associated series voltage drop. The patented infinite dynamic range coulomb counter tallies all accumulated battery discharge and stores it in an internal register accessible via an I2C interface. In addition, this Click board™ also can set the input current limit and has an additional discharge alarm interrupt and SOH monitoring which measures and reports via an I2C interface. This Click board™ is suitable for primary battery-powered system applications, remote industrial sensor applications, or backup power supply applications.

BATT-MON 4 Click is supported by a mikroSDK compliant library, which includes functions that simplify software development. This Click board™ comes as a fully tested product, ready to be used on a system equipped with the mikroBUS™ socket.

BATT-MON 4 Click as its foundation uses the LTC3337, a primary battery state of health monitor from Analog Devices, designed to be placed in series with a primary battery with minimal associated series voltage drop. The LTC3337 integrates a precision coulomb counter that monitors the accumulated charge transferred from a primary battery connected to its BATT IN terminal to an output load connected to its BATT OUT terminal. The patented infinite dynamic range coulomb counter tallies all accumulated battery discharge and stores it in an internal register accessible via an I2C interface. 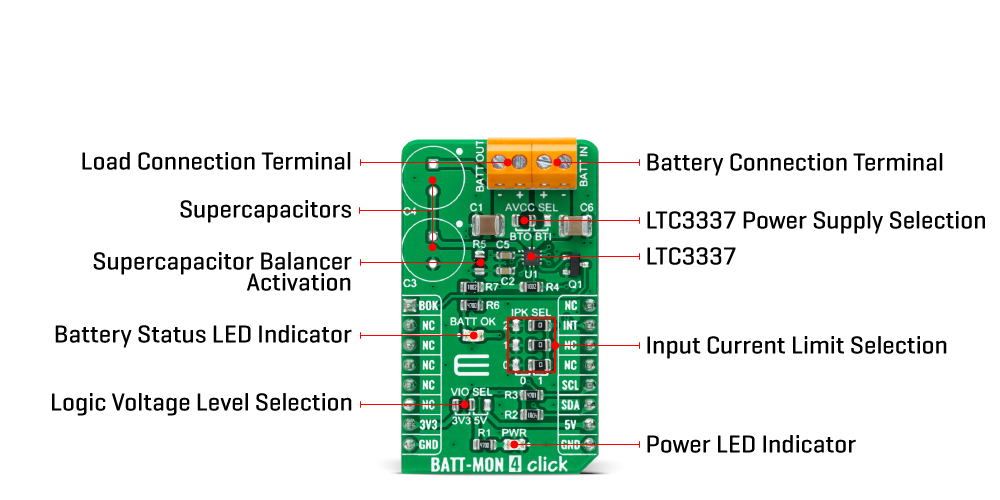 This Click board™ communicates with MCU using the standard I2C 2-Wire interface to read data and configure settings, supporting Standard Mode operation with a clock frequency of 100kHz and Fast Mode up to 400kHz. The LTC3337 also integrates additional state of health monitoring, which measures and reports through the I2C interface, such as battery voltage, battery impedance, and temperature to quantify the battery's charge state and health. In addition, it also has a programmable discharge alarm threshold based on this state of charge (SOC). An interrupt is generated at the INT pin of the mikroBUS™ socket when the threshold is reached.

An integrated coulomb counter operates with a configurable peak current limit. The LTC3337 supports input voltages from 1.8V to 5.5V and a peak current up to 100mA; more precisely, the peak input current limit is selectable from 5mA to 100mA. The selection can be made by positioning SMD jumpers labeled as IPK SEL to an appropriate position 0 or 1.

Coulombs can be calculated for either the BATT IN or BATT OUT terminal, determined by the selected position of the AVCC SEL jumper. The AVCC SEL serves as the power supply for all internal LTC3337 circuits and can be connected to BATT IN or BATT OUT terminal. With AVCC connected to BATT OUT, the coulomb counter counts all coulombs coming out of the battery, including those associated with the LTC3337's quiescent current, which effectively parallels the output load at BATT OUT. When connecting AVCC to BATT IN, the LTC3337's quiescent current represents an error on coulombs out of the battery. However, coulombs associated purely with the output load are now more accurately counted, and this may be beneficial in output power metering applications.

This Click board™ can operate with both 3.3V and 5V logic voltage levels selected via the VIO SEL jumper. This way, it is allowed for both 3.3V and 5V capable MCUs to use the communication lines properly. However, the Click board™ comes equipped with a library that contains easy-to-use functions and an example code that can be used, as a reference, for further development.

This table shows how the pinout on BATT-MON 4 Click corresponds to the pinout on the mikroBUS™ socket (the latter shown in the two middle columns).

We provide a library for the BATT-MON 4 Click as well as a demo application (example), developed using MikroElektronika compilers. The demo can run on all the main MikroElektronika development boards.

This example demonstrates the use of BATT-MON 4 Click board™ by reading the battery voltage and the chip internal temperature.