ADAC 3 Click is a compact add-on board representing the ADC/DAC combo solution. This board features the PCF8591, a low-power 8-bit CMOS data acquisition device with four analog inputs, one analog output, and a serial I2C interface from NXP Semiconductors. The PCF8591 includes analog input multiplexing, an on-chip track and hold function and 8-bit analog-to-digital conversion alongside an 8-bit digital-to-analog conversion. In addition, the user is given the option to select the PCF8591 reference voltage value, choosing between 2,048 and 4,096V. This Click board™ is suitable for various control, monitoring, or measurement applications such as supply monitoring, reference setting, analog control loops, and more.

ADAC 3 Click is supported by a mikroSDK compliant library, which includes functions that simplify software development. This Click board™ comes as a fully tested product, ready to be used on a system equipped with the mikroBUS™ socket.

ADAC 3 Click as its foundation uses the PCF8591, a low-power CMOS data acquisition device from NXP Semiconductors. The PCF8591 comes with four analog inputs configurable as single-ended or differential inputs used to measure voltages, alongside one analog output representing an 8-bit digital-to-analog converter. In addition to measuring voltage, the user can create them as desired and even use DAC and ADC together to generate an input to a circuit and measure the results with the ADC, making it suitable for various control, monitoring, or measurement applications. By its internal structure, the PCF8591 also consists of an analog input multiplexing circuit, an on-chip track and hold function, alongside a serial interface block. 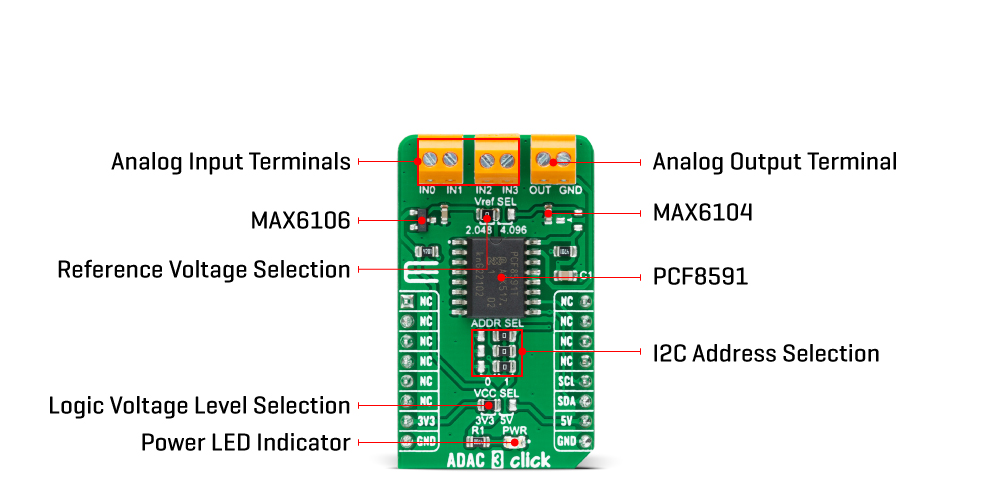 This Click board™ communicates with MCU using the standard I2C 2-Wire interface with a maximum clock frequency of 100kHz. The PCF8591 has a 7-bit slave address with the first four MSBs fixed to 1001. The address pins A0, A1, and A2, are programmed by the user and determine the value of the last three LSBs of the slave address, which can be selected by positioning onboard SMD jumpers labeled as ADDR SEL to an appropriate position marked as 0 or 1.

Besides, the user can choose the PCF8591 reference voltage value by positioning the SMD jumper labeled VREF SEL to a proper position, choosing between 2,048 and 4,096V provided by MAX6104 and MAX6106.

This table shows how the pinout on ADAC 3 Click corresponds to the pinout on the mikroBUS™ socket (the latter shown in the two middle columns).

We provide a library for the ADAC 3 Click as well as a demo application (example), developed using MikroElektronika compilers. The demo can run on all the main MikroElektronika development boards.

This example demonstrates the use of ADAC 3 click board by setting the DAC output and reading the ADC results from 2 single-ended channels (AIN0, AIN1) and from a differential channel (AIN2+, AIN3-).