VCP Monitor 3 Click is a high precision Voltage, Current and Power measurement Click board™ with an input capable of taking up to 15V. It features the LTC2947, from Analog Devices, a high precision power and energy monitor with an internal sense resistor supporting up to ±30A. Three internal no latency delta-sigma ADCs ensure accurate measurement of voltage and current, with up to 0.5% voltage and 1% current accuracy while high-bandwidth analog multiplication provides precise power measurement in a wide range of applications. An internal 300μΩ, temperature-compensated sense resistor minimizes efficiency loss while enabling high accuracy current measurement over the full temperature range. All measured values are stored in internal registers accessible via the selectable I2C or SPI interface. All these features make VCP Monitor 3 Click ideal for using in applications such as industrial measurements, electric vehicles, photovoltaic systems, telecom infrastructure, servers, and more.

VCP Monitor 3 Click is supported by a mikroSDK compliant library, which includes functions that simplify software development. This Click board™ comes as a fully tested product, ready to be used on a system equipped with the mikroBUS™ socket.

VCP Monitor 3 Click is a high precision power and energy monitor with the capability of supporting up to ±30A with a low 9mA offset. Input Range allows 0V to 15V bus voltages with 0.5% measurement accuracy. The LTC2947 is responsible for measuring current, voltage, power, charge and energy with 1% current and charge accuracy and 1.2% power and energy accuracy. Additional features include an alert indication in case some of the thresholds are exceeded, and user-configurable GPIO pin for various functions. The LTC2947 possesses internal 300µΩ, temperature-compensated sense resistor that minimizes efficiency loss and external components, simplifying energy measurement applications while enabling high accuracy current measurement over the full temperature range. All measured quantities are stored in internal registers accessible via the selectable I2C/SPI interface. The LTC2947 features programmable high and low thresholds for all measured quantities to reduce digital traffic with the host. 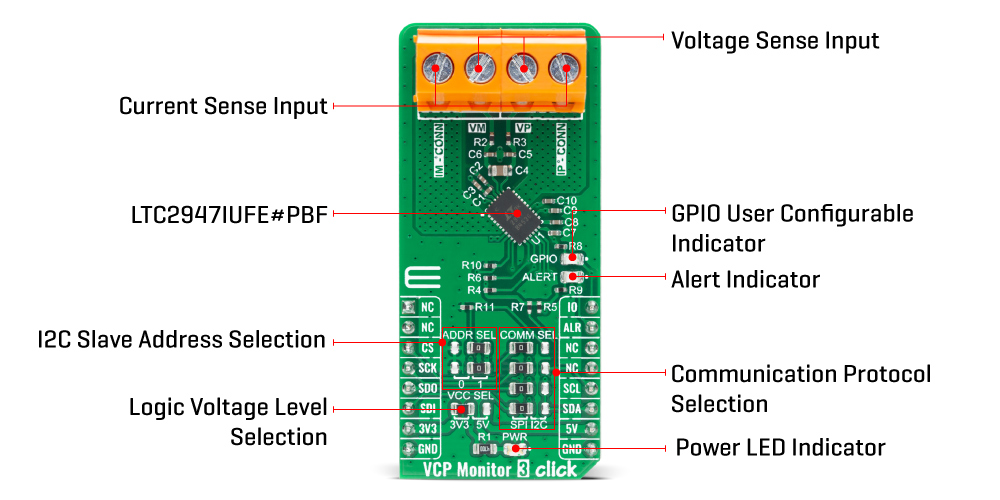 Measuring a total of seven parameters: current, voltage, power, charge (coulombs), energy, and run time, as well as its own chip temperature, makes this click board excellent for high variety of applications. Main chip LTC2947 includes three no latency delta-sigma analog-to-digital converters to simultaneously measure current, voltage, and power. It also measures die temperature and derives the accumulated quantities charge, energy, and time using an on-board oscillator. It stores these values in internal registers that can be read out via the serial interface, configurable as either I2C or SPI. The LTC2947 keeps track of the minimum and maximum measured values for each of the measured quantities. Thresholds can be set for each parameter, and the LTC2947 will set the corresponding bit in the Alert register and optionally alert the host by pulling low on the ALERT pin when a threshold is exceeded. A GPIO pin is included that can be used for four different purposes. It can be configured as a general-purpose-logic input or output, as an output to automatically control a fan based on the LTC2947’s internal silicon temperature measurement or as an input to enable and disable accumulation of charge, energy, and time.

The LTC2947 measures each input with an ADC specifically tailored for the task. Connections labeled as IM (Negative) and IP (Positive) are high side current sense inputs and must be tied in series with the load intended for the measurement. Voltage sense inputs VM (Negative) and VP (Positive) should be connected parallel to the load for a second ADC to measure the differential voltage between those two terminals. More information about the LTC2947’s functionality, electrical specifications, and typical performance can be found in the attached datasheet.

VCP Monitor 3 Click supports both SPI and I2C communication interfaces, allowing it to be used with a wide range of different MCUs. The communication interface can be selected by moving SMD jumpers grouped under the COMM SEL to an appropriate position (SPI or I2C). The slave I2C address can also be configured by SMD jumpers under ADDR SEL when the Click board™ is operated in the I2C mode.

This Click Board™ is designed to be operated with both 3.3V and 5V logic levels that can be selected via VCC SEL jumper. This allows for both 3.3V and 5V capable MCUs to use the communication lines properly.

This table shows how the pinout on VCP Monitor 3 Click corresponds to the pinout on the mikroBUS™ socket (the latter shown in the two middle columns).

We provide a library for the VCP Monitor 3 Click on our LibStock page, as well as a demo application (example), developed using MikroElektronika compilers. The demo can run on all the main MikroElektronika development boards.

The library covers all the functions necessary to control VCP Monitor 3 click board. It initializes and defines the SPI and I2C bus drivers, and holds functions that allow full control of the device to the user. User can change operation mode, read: current, power, voltage, VCC voltage, energy, charge and base time. User can also use various read and write functions.