Pedometer 3 click is an acceleration sensing and step counting Click board™ equipped with the KX126-1063, an advanced tri-axis acceleration sensor IC, which features several acceleration detection algorithms, including a pedometer. The micro-electromechanical sensor (MEMS) element itself is based on the principle of measuring the differential capacitance, which further decreases errors due to manufacturing imperfections and temperature. The MEMS element is coupled with a very sophisticated application-specific IC (ASIC), which offers many advanced features, such as the 2048-byte FIFO buffer, pedometer algorithms, tap, and double tap sensing algorithms, free fall algorithms, tilt single/double pole IIR filtering, and more.

Pedometer 3 click is equipped with the KX126-1063, ±2g / ±4g / ±8g / ±16g tri-axis digital accelerometer, by Kionix. This sensor utilizes an advanced acceleration sensing method, based on the differential capacitance. The integrated MEMS, produced with the proprietary Kionix technology, is composed of two plates. One is fixed to the substrate, while the other can move freely along a single axis. The acceleration causes the change in the capacitance between these plates, which is then processed by an integrated ASIC. The ASIC incorporates a capacitance-to-voltage amplifier which converts the differential capacitance of the MEMS sensor into an analog voltage, used as the input for the low-noise A/D converter (ADC). The integrated ASIC also contains the logic section used to set all the operational parameters of the KX126-1063, such as the data rate, filter settings, interrupts, ADC resolution, and other settings. The ASIC also incorporates an OTP memory that contains the calibration parameters and other device-specific settings used on each power-on reset (POR) cycle. 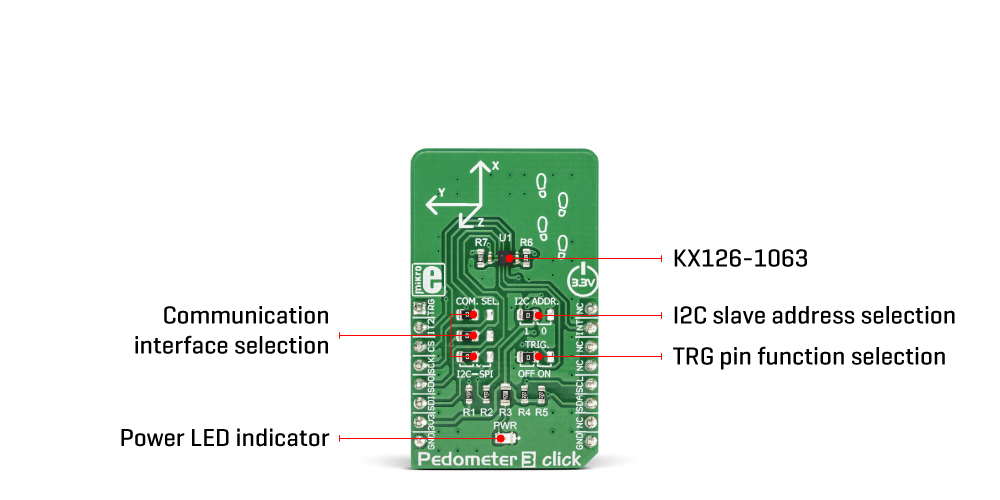 As previously mentioned, the KX126-1063 IC features a range of different detection algorithms, which are used to detect a range of movement and acceleration events. The pedometer functionality is one of these features. In the datasheet, a term engine is used. The pedometer engine can be disabled or enabled, it can have the signal filtering conditioning applied to it (so that the acceleration offset is removed, and the peak detection is improved), it can use a specific acceleration range from ±2g to ±16g, it can set its output data rate register to a specific value, it can have the step count overflow reported as the interrupt on one of the physical pins (INT1, and INT2 pins of the IC, routed to the mikroBUS™ INT and RST pins, respectively), step increment event can  also be directed to trigger an interrupt on one of the INT pins. The step detection parameters of the pedometer engine itself can be configured by the user. There are ten pedometer control registers (PED_CNTL1 to PED_CNTL10) that cover various aspects of the pedometer engine, in addition to general configuration registers which are common to all engines of the KX126-1063 IC. These registers affect the step detection sensitivity, the number of steps discarded before the actual counting begins, the scaling factor, etc. The datasheet of the KX126-1063 IC offers a detailed explanation of each register and its function. However, the Click board™ comes with the mikroSDK compatible library which contains simplified functions, that allow simple setup of the KX126-1063 sensor IC and rapid application development.

The advanced interrupt engine allows both the interrupt pins INT1 and INT2 to be configured by the user. They can be used to trigger an interrupt on the host MCU, using a wide range of sources, including sample buffer events, various engine-specific events, general purpose interrupts (such as wake-up, data ready, and similar), etc. Having two independent interrupt pins is a great solution for optimizing the firmware of the host controller, as the register polling can be reduced greatly, saving valuable MCU processing resources.

Another feature of the KX126-1063 IC is its advanced sample buffer, which can store up to 2048 bytes of data. It can be operated in four different modes, including FIFO, FILO, Stream, and Trigger modes. Each mode applies a different set of rules when filling in the sample buffer, and when the watermark level is reached (a user-configurable threshold). The TRIG pin used for an external buffer control is routed to the mikroBUS™ AN pin labeled as TRG. This pin is used when the sample buffer is operated in Trigger mode: a high logic state on this pin will retain all the samples in the buffer up to the current position (not discarding them anymore when the threshold level is reached), continuing to fill the buffer until its full. When this option is not used, the TRIG pin should be grounded, which is done by positioning the SMD jumper labeled as TRIG, to OFF position (the factory default for the Click board™). Again, more detailed information about the advanced sample buffer can be found in the KX126-1063 IC datasheet.

Each KX126-1063 device is factory calibrated, and its calibration parameters are stored in the one-time programmable memory (OTP). These parameters include the gain corrections and offset calibration. After each POR cycle, these calibration values are automatically applied, reducing the output error. Along with the used MEMS differential sensing technology, this reduces the measurement error to a virtually unmeasurable value. A built-in self-test function allows reliable operation of the Pedometer 3 click.

This table shows how the pinout on Pedometer 3 Click corresponds to the pinout on the mikroBUS™ socket (the latter shown in the two middle columns).

We provide a library for the Pedometer 3 click on our LibStock page, as well as a demo application (example), developed using MikroElektronika compilers. The demo can run on all the main MikroElektronika development boards.

Note: The start configuration chip is required at the beginning of each program so that the chip wakes up and prepares for operation and measurement. What is included and set in the start-up function can be viewed in the help file.