Oximeter click is a versatile photometric Click board™, perfectly suited for measuring the blood oxygen saturation. It employs ADPD105, a highly configurable photometric front end (AFE) device from Analog Devices. Almost all parameters of the IC are user-configurable, allowing this AFE IC to be used on a wide range of various photometric applications. It utilizes two LEDs (red and infrared), and one photodiode (PD) sensing element, making it is possible to get very accurate and reliable oximetry readings. For those who want to expand the functionality of this Click board™. It offers two headers located on the sides of the Click board™, which allow expanding it with different types of LEDs, PDs, reconfiguring its purpose that way.

Click on  NOTIFY ME  if you want to be notified by email when the product is back in stock.

The main component of the Oximeter click is the ADPD105, a highly configurable photometric front end (AFE) device from Analog Devices. This IC has three current sinks LED drivers with the common cathode and four AFE input channels to which the photodiode (PD) elements can be connected. The IC actually has eight PD inputs, which can be routed to AFE input channels, depending on needs. There are three possible PD configuration settings, programmable via the I2C interface. Oximeter click uses two LEDs, well suited for measuring the oxygen saturation in the blood: a red color LED and an infrared LED. Also, a single PD element is used to sense the reflected light. However, this click offers headers on its sides, which allow connecting of additional LED/PD elements, expanding the usability of the Click board™. Jumpers labeled as J1 to J3 are used to completely disconnect the onboard photo elements, freeing these lines to be used with the external photo elements. 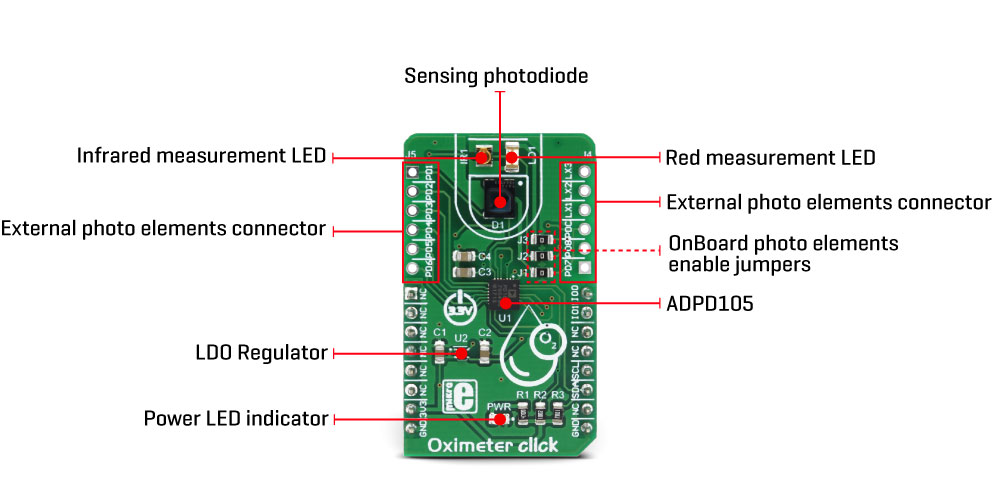 The current from PDs passes through the analog block. The analog block itself contains four AFE signal conditioning sections, which process the input current by using trans-impedance amplifiers (TIA) with programmable gain, bandpass filters, and integrators, reducing the influence of external factors - such as the ambient light and similar. The analog block is coupled with the 14-bit ADC, and finally - a digital data path and control block used to manage all the internal routing and provide data on the I2C interface.

The main working principle of this device is based on driving LED elements and measuring the response via the photosensors. There are two time-slots that are consecutively executed, each with its own path that uses independent settings for LED driving, AFE setup, and data collection. During each time-slot period, the configured LEDs (or a LED) are pulsed with programmable magnitude, duration and number of pulses. The PD sensing intervals coincidence with the LED pulses, rejecting ambient light and other external influences that way. Each LED pulse response is converted by the 14-bit ADC, and integrated by the AFE integrator block. Up to 255 pulse responses can be integrated during one sampling period, providing up to a 20-bit maximum range.

After the measurement is completed, the data is available either in the register directly, or it is stored on the 128-byte FIFO memory buffer. The interrupt event can be used to alert the host MCU when the FIFO buffer exceeds the programmed threshold. Both time slots are able to store their data on the FIFO buffer.

Two GPIO (I/O) pins can be configured in a number of different ways: they can be set as interrupts, with programmable polarity, driving mode (open-drain, push-pull), and functionality. They can serve as interrupt outputs, or alternatively, they can be set to output 32kHz clock, to accept external clock, sampling synchronization pulses, etc. These pins perfectly fit in the programmable concept of the ADPD105 IC itself, offering the extended functionality of the Click board™. IO0 and IO1 pins are routed to the PWM pin of the mikroBUS™ and to the INT pin of the mikroBUS™, respectively.

Already low power consumption can be further reduced by disabling all the unused channels. This will free the resources, and reduce power consumption. The IC requires 1.8V in order to work properly. Therefore, a small regulating LDO is used, providing 1.8V out of 3.3V mikroBUS™ rail.

More information about the registers and how to set them can be found in the ADPD105 IC datasheet. However, included library contains functions that allow easy configuration and use of the Oximeter click. The included exemplary (demo) application demonstrates their functionality and can be used as a reference for a custom design.

This table shows how the pinout on Oximeter click corresponds to the pinout on the mikroBUS™ socket (the latter shown in the two middle columns).

Note: when using external photo elements on lines LEDX1, LEDX2, and PD1, it is necessary to remove the respective jumpers (J1 - J3)

We provide a library for the Oximeter Click on our LibStock page, as well as a demo application (example), developed using MikroElektronika compilers. The demo can run on all the main MikroElektronika development boards.

The library can communicate with the device via I2C driver by writing to the registers and by reading from the registers, including data registers. The library has the ability to measure the level of oxygen (O2) in the blood, something like blood pressure. Library also can configure the device to works in two Time Slot Mode independently with different configurations. For more details check the documentation.

This click board is supported with mikroSDK - MikroElektronika Software Development Kit. To ensure proper operation of mikroSDK compliant click board demo applications, mikroSDK should be downloaded from the LibStock and installed for the compiler you are using. For more information about mikroSDK, visit the official page.

Please enter your details below, and we will send you an email when the product is back in stock.