Dual EE Click contains two AT24CM02 EEPROM ICs onboard which gives total of 4MB of memory. Each memory IC can be addressed through the I2C interface with the transfer speed of 400KHz. This Click board™ offers any kind of temporary or permanent data storage for various. embedded electronic devices, as well as simple data logging or even storing various working parameters of a certain module or device. It can also safeguard all of the sensitive data in case of a particular power cycle and it has many other capabilities.

Dual EE click is supported by a mikroSDK compliant library, which includes functions that simplify software development. This Click board™ comes as a fully tested product, ready to be used on a system equipped with the mikroBUS™ socket.

Dual EE click is aimed towards industrial and commercial applications, which require low voltage and low power operational capabilities. It can be used for any kind of temporary or permanent data storage for various embedded electronic devices, simple data logging, storing various working parameters of a module or device, safeguarding the sensitive data in case of a power cycle, and other similar applications where EEPROM memory is needed.

Dual EE Click contains 2 EEPROM ICs onboard – the AT24CM02, an I2C serial EEPROM from Microchip. This means that the Ics can have a different I2C address so that users can actually choose which one they would like to use at a particular time. This is achieved by wiring the I2C address selection lines from one of the Ics to the vcc, while the other IC is wired to the gnd. Given this feature, it is important to note that this click board has a total of 4 MB of memory. 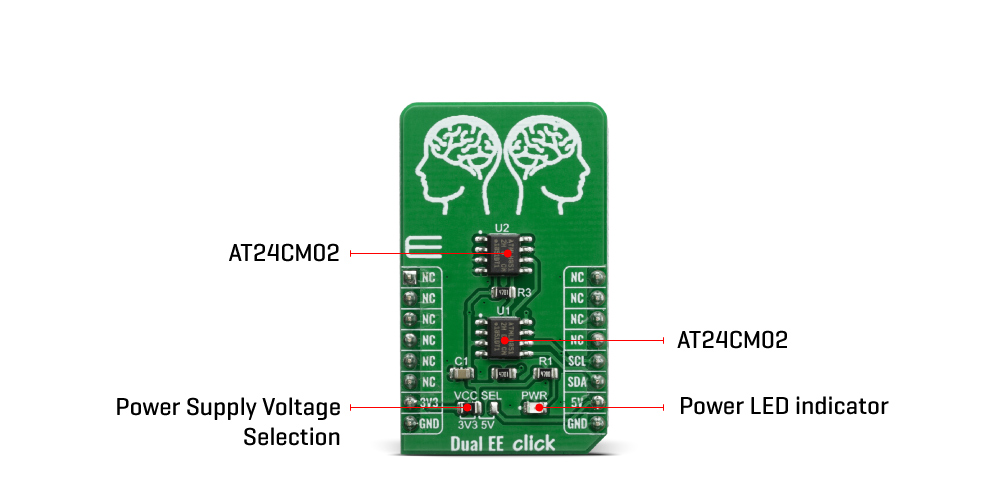 The EEPROM density is usually expressed in bits, so exactly 2.097.152 bits are organized in units or words of 8 bits, which gives 262.144 bytes of data memory. Furthermore, the EEPROM is organized in so-called pages. One page holds 256 bytes and there are 1024 pages (1024 pages x 256 bytes = 262.144 bytes total). Given that this click contains two separate EEPROM Ics this Click board™ has twice as many memory which equals 4 MB.

Having insight into how the memory cells are organized, is important for Write and Erase operations. The I2C pins are routed to the mikroBUS™ so the communication is easy and straightforward. Both 100KHz and 400KHz transfer speeds are supported by the AT24CM02 IC, as well as the 1MHz Fast Mode Plus (FM+) I2C communication, for the MCUs with I2C modules that can support that speed.

One of the key features of the AT24CM02 IC is the Error Detection and Correction scheme (EDC), which allows error correction by utilizing six additional bits, internally assigned to a group of four bytes. This protection scheme is capable of correcting some types of bit errors, staying transparent to the end user. The bit comparison and error correction are done internally.

The Dual EE Click board™ offers a selection between 3.3V and 5V operation, with the onboard SMD jumper, labeled as PWR SEL. This allows both 3.3V and 5V MCUs to be interfaced with this Click board™.

The attached device datasheet contains an in-depth explanation of all the mentioned functions. However, Mikroe provides a library with functions that make the final code clean and readable, simplifying working with this device. These functions internally employ the aforementioned communication mechanism and expose only a simple and clean interface to the user. The provided example code demonstrates the functionality of these functions. It can be used as a reference point for a custom development.

This table shows how the pinout on Dual EE Click corresponds to the pinout on the mikroBUS™ socket (the latter shown in the two middle columns).

We provide a library for the DualEE Click on our LibStock page, as well as a demo application (example), developed using MikroElektronika compilers. The demo can run on all the main MikroElektronika development boards.

The library includes functions to write data to memory and read data from memory.