BT Click is a compact add-on board targeted for applications that require both Bluetooth Smart and Classic connectivity. This board features the BT121, a dual-mode Bluetooth Smart Ready module solution that gives unparalleled flexibility to integrate both Bluetooth Smart and Bluetooth Basic Rate/Enhanced Data Rate (BR/EDR) wireless technologies from Silicon Labs. It contains a high-performance Bluetooth radio, a low-power ARM Cortex MCU, and a Bluegiga Bluetooth Smart Ready stack software marking it an extremely easy-to-use device. This Click board™ can be used in a wide variety of applications such as cable replacement, HID devices, health and fitness, PoS (point-of-sale), industrial and home automation gateways, and others.

BT Click is supported by a mikroSDK compliant library, which includes functions that simplify software development. This Click board™ comes as a fully tested product, ready to be used on a system equipped with the mikroBUS™ socket.

BT Click is based on the BT121, a dual-mode Bluetooth Smart Ready module solution that gives unparalleled flexibility to integrate both Bluetooth Smart and Bluetooth Basic Rate/Enhanced Data Rate (BR/EDR) wireless technologies from Silicon Labs. It contains a high-performance Bluetooth radio, a low-power ARM Cortex MCU, and a Bluegiga Bluetooth Smart Ready stack software marking it an extremely easy-to-use device. Also, it contains two configurable power-saving modes. Power Mode 1 is a shallow sleep state with all clocks and peripherals running but with the processor core stopped, while Power Mode 2 is a deep sleep state in which most peripheral devices and system clocks are Power-Down states. 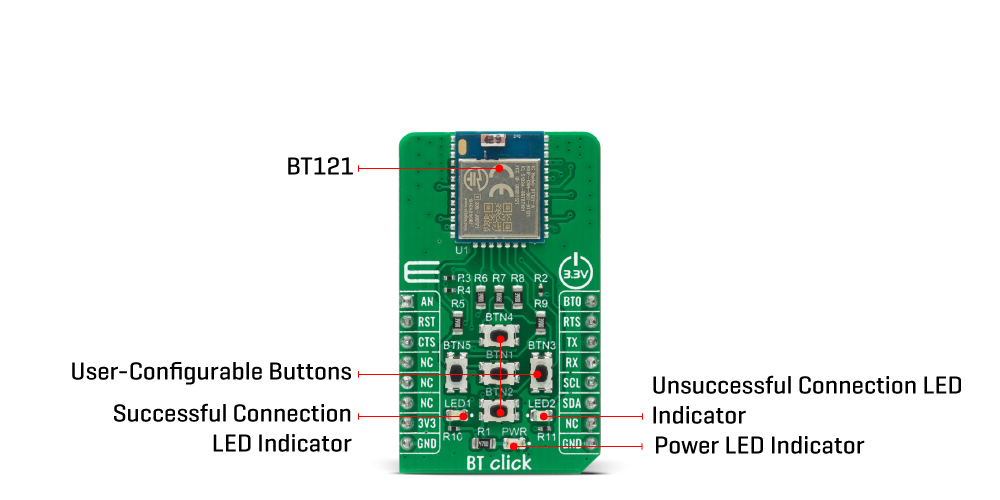 The BT121 module generates all the required clock signals internally. The clocks used by the internal MCU and external peripherals are synchronized to an internal 32.768kHz crystal connected to the internal RTC, always available to Wake-Up the module. It will take approximately two seconds for the RTC oscillator to stabilize after power is connected. To avoid this delay it's recommended not to turn off the power supply of the BT121 but to set the module into the lowest power mode providing the smallest current consumption.

This Click board™ uses the UART communication interface as its default communication protocol that supports all standard baud rates up to 4 Mbps. It is also left the option for the user to use the I2C interface if he wants to configure the module and write the library by himself. In addition to standard UART TX/RX pins, it also has UART RTS/CTS pins routed on the CS and PWM pins of the mikroBUS™ socket recommended for every application for reliable data transfer.

The BT121 module comes with built-in firmware that provides the ability to use the module Update feature. The module can be updated through the UART interface by holding the built-in ARM® Cortex® MCU of the BT121 module in a Reset state via RST pin, which typically will free the UART communication lines to be used by the Device Firmware Update protocol (DFU). DFU protocol contains commands and events that are related to controlling firmware update over the configured host interface and are available only when the module has been booted into DFU Mode. The user can find all the necessary commands in the attached API reference document.

The Update function consists of the following steps:

In addition to all features, the BT Click also has additional components such as 2 LED indicators as well as several onboard pushbuttons. Based on the example code, the blue LED labeled as LED1 is used to visually indicate the successfully established connection, and the red LED labeled as LED 2 reports when establishing the connection is unsuccessful. The onboard pushbuttons don’t have a precisely defined function. It can be configured to operate as a standard general-purpose digital I/O’s, and they are left to the user to configure them according to their needs.

This table shows how the pinout on BT Click corresponds to the pinout on the mikroBUS™ socket (the latter shown in the two middle columns).

We provide a library for the BT Click on our LibStock page, as well as a demo application (example), developed using MikroElektronika compilers. The demo can run on all the main MikroElektronika development boards.

The library covers all the necessary functions to control BT Click board™. Library performs a standard UART interface communication.