Finally, this is what all those compiler updates have been about. VisualTFT 4.5.0 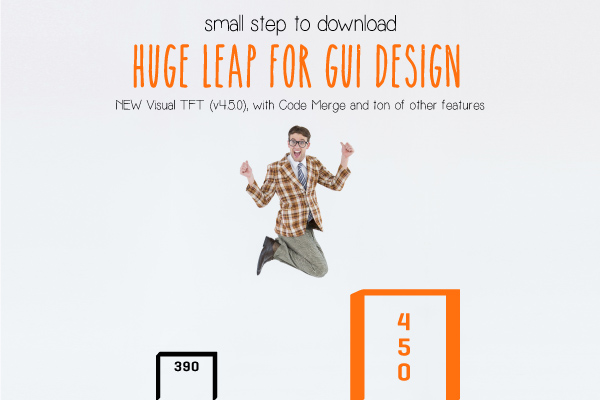 Series of jabs followed by a knockout punch, that's how our software department works. After a series of incremental compiler updates, VisualTFT 4.5.0 is here. It's a small step to go to the product page and click download, but it'll be a huge leap for your future GUI design efforts.

No more accidental overwrites. With code merge, you can generate code from Visual TFT, edit it in the compiler, then go back and do more editing in Visual TFT, regenerate the code again, and — as long as you've followed a few simple guidelines — all your code changes will be preserved.

With code merge, Visual TFT and the compilers are now practically linked together into one powerful GUI building tool that gives much more flexibility and control over your code.

Try it right now, go download the new version of Visual TFT and make sure you have the latest version of your compiler. Then, see this overview on how it works. In three short minutes you'll learn everything you need to know.

As for hardware support, the new version of Visual TFT adds support for FT810 and FT811 graphic controllers.

It even handles video playback!

You'll also be able to scale and rotate images in your FT8x projects.

Don't forget to download FT800 and FT810 libraries from Libstock. You'll need them for some of these features.

Vertical text has been added, by popular demand. Default fonts can be set. Progress bar draw/update procedures had been improved.

It's been a long wait but the "What's New" file can't fit on a single printed page (see it under the specs tab on the Visual TFT landing page.

For a detailed overview of all new features, watch this video: