The wait is over. New version of PIC32 compilers bring support for 24 chips from the MZ family. Also, new PIC32MX chips get ICD support. The compiler is up to date. 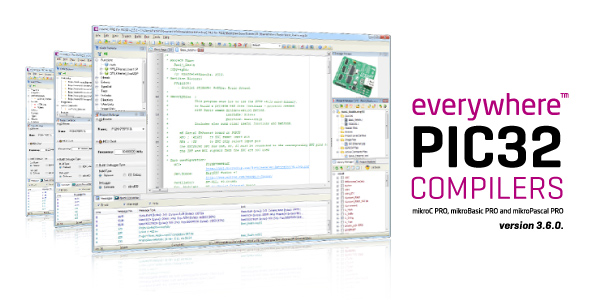 The new release also brings a new version of mikroProg suite (version 2.34). To use PIC32MZ MCUs, you'll also have to update the firmware (either on the standalone mikroProg for PIC or the one built in the EasyPIC Fusion. Just connect either one of those, launch mikroProg suite, and click "Firmware Update" under the USB menu. Aside from the PIC32MZ support, the firmware also improves performance for PIC32MX, so it's worth updating in any case.

Let's commemorate this occasion with a pompous clip. Behold, PIC32MZ arrives into the MikroE PIC32 toolchain.

The MCU card for the EasyPIC Fusion will be available soon.

You'll notice some other changes. It doesn't concern those of you who already own the license, but if you are purchasing it just now, the key file license delivery is out. We'll now do digital activations, or send physical license activation cards (will be available shortly). The dongles also remain as an option.

Also, we're introducing a flat pricing policy so all three languages are priced the same, to reflect the fact that all three get equal treatment.