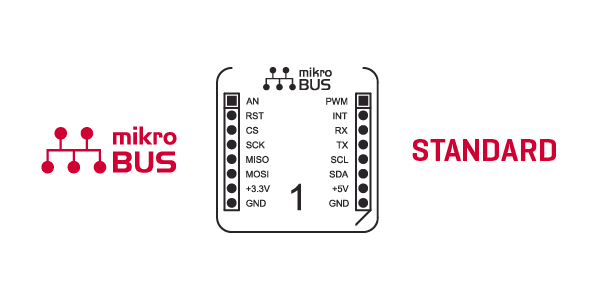 The mikroBUS™ standard was introduced in 2011, with the release of EasyGPS, later renamed into GPS click.

Back then, we published a single page document that defined the pinout and proclaimed mikroBUS™ an open standard, allowing any hardware designer to implement sockets on their boards.

Soon after, we started releasing new click boards almost weekly. With the numbers well into the hundreds, the appeal of the mikroBUS™ socket grew. Most notably, the sockets have been implemented on FlowPaw, the build-your-own-gizmo kit; and Quail, the hardware platform for NETMF developers.

But other than that, adapters and shields that brought click™ board connectivity to a variety of platforms appeared on the market, produced both by us and third party developers.

Concise as it was, the original mikroBUS™ standard specifications left some ambiguity in regard to silkscreen markings, positioning the socket on the board and suchlike.

These ambiguities were resolved on the go, usually with us giving recommendations to developers in email exchanges (others simply faithfully copied the socket design from our boards).

But as more and more designers, from companies both big and small, started showing interest in mikroBUS™, it was time to address all issues in a more formal manner.

The new standard also empowers developers to make their own mikroBUS™-compatible add-on boards (you’re not allowed to call them clicks though).

Documents like these are, of course, in perpetual development as new design scenarios and situations occur. Nevertheless, our hope is that it will help both designers and end-users by providing a uniform and clearly defined set of standards for everyone to follow.