Traditional encoders use various methods including light interrupters and hall effect sensors to describe positioning information. While these systems can be very accurate, particulate matter can interfere with a light interrupter and hall effect tended to not have as high resolution.  What we have here today is something far more convenient, accurate, and economic.  MikroElektronika has introduced the Magneto click as of this January and carried on the compact board is an Austria Micro Systems AS5048A rotary position sensor.

What sets the Magneto apart is the contact-less magnetic technology.  Not only does this sensor work with no contact with the magnet, but it also can reside above or below the chip.  What makes this even more incredible is the fact that it has 14bit resolution.  That means that you have 16384 positions every 360 degrees of angular movement.

MikroE. has always gone the extra distance in bringing the barrier to entry into high tech a short journey.  Our IDE makes added libraries just as easy as checking your email.  With this in mind, we are going to be installing the Magneto click library and examine the code that makes it work.

The first thing we want to do is include the magneto library into our search path.  This can be easily done by selecting Project / Edit.

Include the magneto.h header file into our project by:

Our sensor works with the SPI bus, therefore we need to initialize the bus that our Magneto is attached to in order for communication to work.  The SPI library should be selected in the Library manager when you selected the Magneto.

Initialization is best when moved away from the main function by placing all the initialization routines into a separate function.

You might be asking why there is a function prototype at the top.  Every function in C needs to have a prototype.  While it does work by leaving the main function at the bottom, if the prototype was missing and somehow the function was beneath the calling function, the compiler wouldn't be able to find it and errors would occur.  Best practice is to always have a prototype for each function.  The only exception to this rule is the main function and any ISR routines.

Let's initialize the bus.  The AMS sensor is quite sensitive to speed.  A maximum 5 Mhz is tolerated and what is a common mistake is that the sensor itself is slightly out of phase from the system clock.  By this omission we need to take care that we sample the data coming from the slave on the falling edge.  To do this, our initialization looks something like this:

Once our bus is running, the only thing needed by the MikroE library is to initialize the Magneto click with some default settings.  Since the library supports I2C and SPI modes, we need to specify the bus type, the address of the device if we were using I2C and how many devices are on the bus.  As a side note, the AMS sensor allows for a unique form of chaining.  We can chain a number of devices together without taking any additional pins. 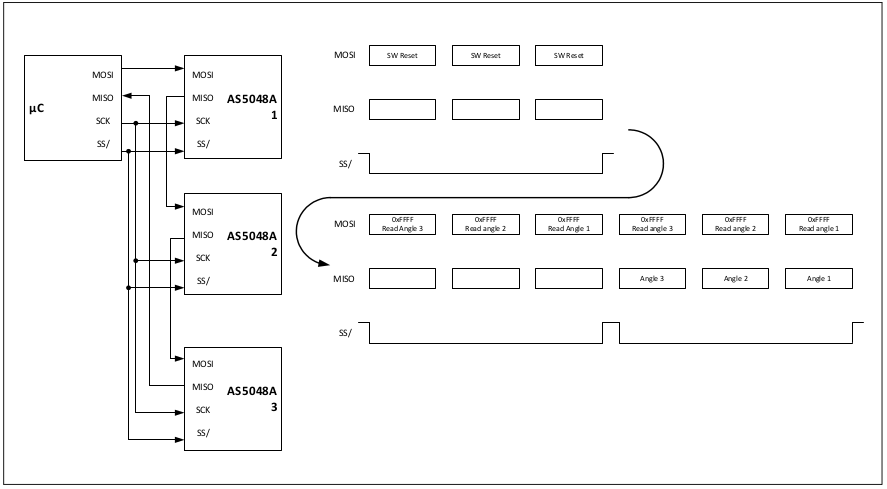 The last argument is how many devices will be on the bus.  For this demo we have only the 1 device on a SPI bus.

This is really all we need to get started except for one thing.  When you press the build button you are going to be presented with an error.

The library requires that you declare what pin the chip select is on.  I'm using the EasyMx PRO version 7 and placing the Magneto in the mikroBUS slot 1.  The chip select for that port is PD13.

Add in your project the following:

Now you are ready to measure angular movement with 14bit precision.

According to the documentation, there are 3 ways to extract measurements from the sensor: Angles, Degrees, or Radians.  Each is used is various purposes.  Angles returns numbers between 0 - 16384, Degrees returns degrees in fractional increments from 0 - 359.9, and Radians are the converted degrees into radians.  Each of the functions returns a pointer to either a int16_t or float. What you do with the information is up to you and your intended application.

What you may notice is that the functions that return measurements all look something like this:

Because the Magneto can be daisy chained together, you have multiple results when fetching a measurement.   To make things easy you can create a pointer, and have the pointer be assigned to the return of a call to any of the measurement functions.  For instance:

That statement says get the angle from device 1.  To use the angle you would dereference the pointer *angles.

In the case you have multiple sensors and you wanted to access all of them, then the following would retrieve all values:

Errors can happen depending on the setup and situation.   Four errors are defined, framing errors, wrong command, wrong parity, and num of clocks.  For the first 3 you should never see.  These are errors related to the driver itself.  The last error, however, will only happen if your clock speed is too fast for the sensor.  If you think you are having errors, the library has a short function to check.  After every operation you can call magneto_error() and it will return with a true or false if an error occurred.  If an error does occur, you can retrieve the error by using the magneto_get_errors( device_num );

While the idea isn't new, the technology and method of angular measurement is revolutionary.  Try submerging your optical encoder in a bath of toxic chemicals and then get back with me on how well that worked for you.  On the other hand, magnetic flux doesn't care about what medium it lives in.  In fact, magnetism works at any depth in the sea, how about a casing housing an optical encoder?  The possibilities are tremendous and once the automation world grabs hold of this technology, I predict this will be the new standard in angular measurement.