Creator Ci40 kit likely to blow past its funding goal

Creator Ci40, the IoT-in-a-box kit from Imagination Tech that includes clickers and click boards, is turning out to be a major success on Kickstarter. Exactly seven days passed since the campaign launched, and the project is already 75% funded, with 23 more days to go. 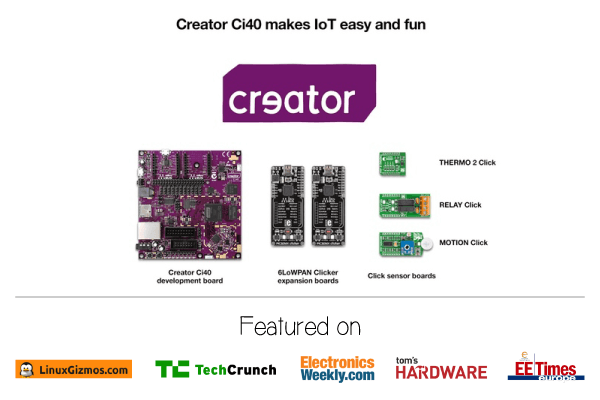 The publicity definitely helped. The biggest news outlet to run a story on the campaign was TechCrunch - which makes for a second appearance of click boards there (the first was for the FlowPaw campaign). Aside from clicks, the story features quotes from Imagination's Senior Technology Marketing Specialist Alexandru Voica, explaining what's distinguishes this kit compared to other IoT solutions.

Among other things, Voica points out the integration with Brillo: “Creator is one of the few dev boards selected by Google to be part of its Brillo golden reference program — these boards will be the equivalent of Nexus phones when it comes to Brillo, receiving regular updates and patches ahead of others.”

Other than Brillo, the Ci40 Creator supports the most popular versions of Linux, which brought it to attention of blogs in that space. A Linux.com article spotted click boards appearing in more and more places, commenting that "the click adoption both follows -- and leads -- a trend among hacker projects opting for ready-made expansion systems for IoT sensors. SolidRun uses click in its HummingBoard SBCs and new ClearFog networking SBC."

The Ci40 Creator was also featured on EETimes, Tom's Hadware, Linux Gizmos, CNXSoft and many more. A common thread in several of those stories is the question of why would a well-established company like Imagination go to Kickstarter to fund a project. Imagination's answer is that crowd-funding allows them to gather feedback from the community early on. So if you want to have your voice heard, and possibly influence the future direction of Creator – we encourage you to leave your feedback on the Kickstarter page. There's an active discussion going on there.

You can also show your support by making a pledge. There's still 65 slots left to get the complete kit at a reduced price.