Coding Standards, it's the LAW!

The purpose of having coding standards is to provide a guiding format for code development. This facilitates the ease of construction when multiple programmers are developing separate or even shared projects. When mixing styles or standards, maintaining that code and in different coding philosophies becomes difficult. The ultimate goal is to elevate some of the complexity and confusion that may arise in project development and to ease entry into existing projects by unfamiliar developers.

File numbers can grow into excessive numbers. Some basic folder structure can alleviate this with the following folder construction. 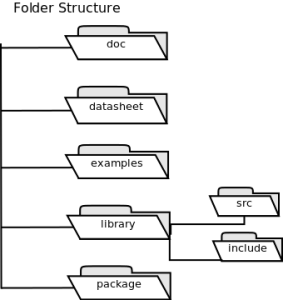 doc : All files related to instruction or documentation of project. To include manufactures application notes and related user manuals.

datasheet : Projects consisting of peripherals or hardware interfacing will need to follow the manufacturers datasheet. For this purpose,

datasheets for the hardware should be placed here.

examples: The examples found here will be code examples that use the library and can include multiple platforms. Platforms need to to be separated into folders and labeled to their respective platform

package: Compressed libraries are stored here for use with MikroE. Package manager.

In addition, it is conventional to use a “README.md” file for summary of the contents of the directory and/or directory tree. It is recommended to document both "the bigger picture" and issues for the program as a whole in the README

Suggested sections of a C source file are the following:

This double-inclusion mechanism should not be relied upon, particularly to perform nested includes.

The comments should describe what is happening, how it is being done, what parameters mean, which globals are used and which are modified, and any restrictions or bugs. Short comments should be what comments, such as "compute mean value", rather than how comments such as "sum of values divided by n". C is not assembler; putting a comment at the top of a 3-10 line section telling what it does overall is often more useful than a comment on each line describing micro-logic.
Comments that describe data structures, algorithms, etc., should be in block comment form with the opening /* in columns 1-2, a * in column 2 before each line of comment text, and the closing */ in columns 2-3.

Very long block comments such as drawn-out discussions and copyright notices often start with /* in columns 1-2, no leading * before lines of text, and the closing */ in columns 1-2. Block comments inside a function are appropriate, and they should be tabbed over to the same tab setting as the code that they describe. One-line comments alone on a line should be indented to the tab setting of the code that follows.

Very short comments may appear on the same line as the code they describe, and should be tabbed over to separate them from the statements. If more than one short comment appears in a block of code they should all be tabbed to the same tab setting.

These are keywords that will be parsed out of the comments to produce documents and reports. The ease of automated documentation tools have made it a staple of the modern developer. These are some of the keywords that are encouraged to use.
@author  specifies the author of the module
@version  specifies the version of the module
@param  specifies a parameter into a function
@return  specifies what a function returns
@todo  what remains to be done
@bug  report a bug found in the piece of code
A list of commands can be found at: http://www.stack.nl/~dimitri/doxygen/manual/commands.html

Global declarations should begin in column 1. All external data declaration should be preceded by the extern keyword. If an external variable is an array that is defined with an explicit size, then the array bounds must be repeated in the extern declaration unless the size is always encoded in the array (e.g., a read-only character array that is always null-terminated). Repeated size declarations are particularly beneficial to someone picking up code written by another.
The "pointer" qualifier, '*', should be with the variable name rather than with the type.
char *s,*t,*u;
instead of
char* s,t,u;
which is wrong, since 't' and 'u' do not get declared as pointers.
Unrelated declarations, even of the same type, should be on separate lines. A comment describing the role of the object being declared should be included, with the exception that a list of #defined constants do not need comments if the constant names are sufficient documentation. The names, values, and comments are usually tabbed so that they line up underneath each other. Use the tab character rather than blanks (spaces). For structure and union template declarations, each element should be alone on a line with a comment describing it. The opening brace ({) should be on the same line as the structure tag, and the closing brace (}) should be in column 1.

These defines are sometimes put right after the declaration of type, within the struct declaration, with enough tabs after the '#' to indent define one level more than the structure member declarations. When the actual values are unimportant, the enum facility is better

In any file which is part of a larger whole rather than a self-contained program, maximum use should be made of the static keyword to make functions and variables local to single files. Variables in particular should be accessible from other files only when there is a clear need that cannot be filled in another way. Such usage should be commented to make it clear that another file's variables are being used; the comment should name the other file.
The most important types should be highlighted by typedef-ing them, even if they are only integers, as the unique name makes the program easier to read. Structures may be typedef-ed when they are declared. Give the struct and the typedef the same name.

The return type of functions should always be declared. If function prototypes are available, use them. One common mistake is to omit the declaration of external math functions that return double. The compiler then assumes that the return value is an integer and the bits are dutifully converted into a (meaningless) floating point value.

Of the three major brace placement strategies one is recommended:

A Line Should Not Exceed 78 Characters

Even though with big monitors we stretch windows wide our printers can only print so wide. And we still need to print code. Nobody likes to scroll sideways when reading code.

If Then Else Formatting

Different bracing styles will yield slightly different looks. Java and JavaScript can easily be recognized by the bracing placed directly after the condition. In C the common format is also recognizable by the following format:

Falling through a case statement into the next case statement shall be permitted as long as a comment is included. The default case should always be present and trigger an error if it should not be reached, yet is reached. If you need to create variables put all the code in a block.

Goto statements should be used sparingly, as in any well-structured code. The main place where they can be usefully employed is to break out of several levels of switch, for, and while nesting, although the need to do such a thing may indicate that the inner constructs should be broken out into a separate function, with a success/failure return code.

When a goto is necessary the accompanying label should be alone on a line and to the left of the code that follows. The goto should be commented (possibly in the block header) as to its utility and purpose.

Consider the following example where both problems occur:

Mixing continue with break in the same loop is a sure way to disaster.

The trouble is people usually try and stuff too much code in between the ? and :. Here are a couple of clarity rules to follow:

One Statement Per Line

There should be only one statement per line unless the statements are very closely related.
The code is easier to read. Use some white space too. Nothing better than to read code that is one line after another with no white space or comments.
One Variable Per Line
NO:
char **a, *x;
YES:

Some good points to this style is: