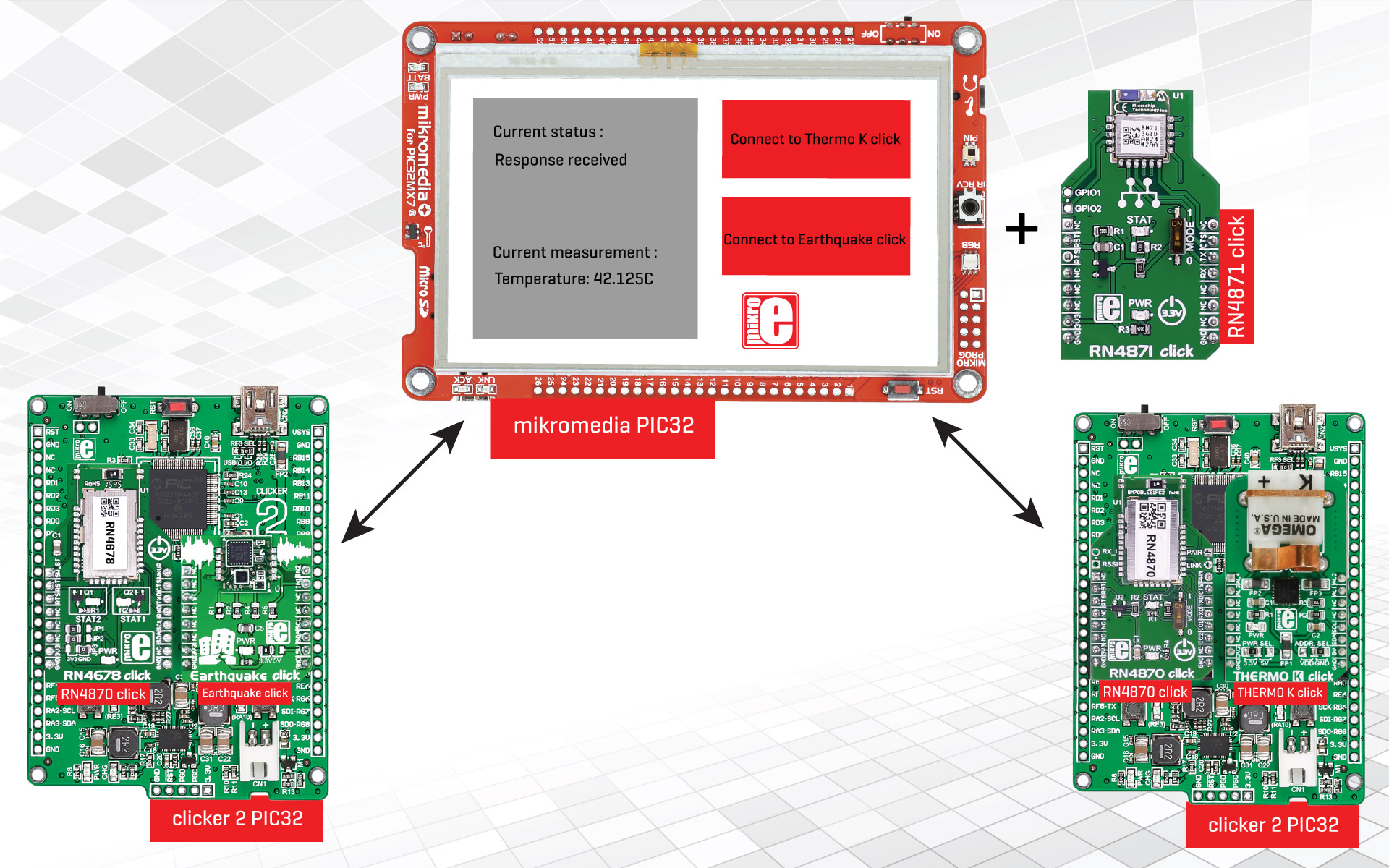 With advances in microcontrollers and Bluetooth® technology, creating a network of remote sensor devices that report their data to a control station has become a simple matter. This article will show how to make a small network of 2 sensors and a central device that presents collected data on a screen. It will include step by step instructions to setup this project, as well as notes on expanding and changing it to better fit your needs.

As can be seen from the diagram, this project consists of 3 separate modules:

Now that the hardware is in place, it is time to load up the code. Let's see what's inside...

We will have a look at the sbtp parser first, as it is the simplest part of the code. To send data safely over Bluetooth, and prevent corruption, as well as make sure that the receiver knows what kind of data it is receiving, and from which sensor, it is necessary to create some kind of a protocol. This project uses custom-made Simple Bluetooth Protocol (SBTP), which is explained in detail in the header file of the parser. The parser deals with recognizing if the sentence passed to it is correct, and then putting the data into matching fields of a data structure. Such data can then be retrieved by the other layers of the application.

Hardware layer contains all the functions that send commands to the Bluetooth click. It contains Bluetooth initialization function, a function for connecting and sending data to other Bluetooth clicks, and function for reading from the data stream, and passing the sentence to parser after it is complete.

While the previous two layers are compatible with any platform and purpose, this layer deals with things more specific. It sets identifiers and addresses for clicks used in the project, initializes services that are required (such as UART or I2C), sets interrupt and pin settings, and calls functions from other modules with parameters specific for a particular purpose.

Listening for messages from other modules is done in the following way: Interrupt function will send all received data to the hardware layer. Hardware layer then performs only basic checks to see if received data belongs to a valid sentence, to avoid parsing just anything that comes via the data stream. If the hardware layer detects that a sentence has been received (marked by the '#' character at the beginning, and 'rn' sequence at the end), it will set the flag that the sentence is ready. Another function, called from the main loop, will periodically check the flag, and if the sentence is ready, it will be sent to the parser for detailed checking and processing.

If the module in question is a master module, upper layer also deals with triggers (such as button press) that will start the communication, and send a request for data to sensor modules.

This example is specifically designed to be easily expanded or modified in a number of different ways:

With the ever-growing number of click boards and development systems, a clever engineer can think of an unlimited number of ways to utilize them. This project demonstrates how to make a simple wireless sensor network, which can then be easily expanded and modified, to serve any purpose.