LoRa 4 click is a LoRa® RF technology based SRD transceiver, which operates at a sub-gigahertz frequency of 868MHz. Thanks to the spread spectrum modulation feature, as well as the low power consumption, it is capable of achieving a long-range LPWAN communication, immune to interferences. This click board™ features an embedded LoRaWAN® Class A and Class C compliant stack. The transceiver is RED 2014/53/EU certified and compliant to REACH and RoHS regulations, allowing for an easy integration into the final application, reducing development time, costs, and time to market.

LoRa 4 click is a LoRa® RF technology based SRD transceiver, which operates at a sub-gigahertz frequency of 868MHz. Thanks to the spread spectrum modulation feature, as well as the low power consumption, it is capable of achieving a long-range LPWAN communication, immune to interferences. This click board™ features an embedded LoRaWAN® Class A and Class C compliant stack. The transceiver is RED 2014/53/EU certified and compliant to REACH and RoHS regulations, allowing for an easy integration into the final application, reducing development time, costs, and time to market.

The main active element of the LoRa 4 click is a wireless transceiver module from Mipot company, labeled as 32001353. It is the LoRa® RF technology-based long-range transceiver, featuring the LoRaWAN® protocol, optimized for a robust LoRaWAN® networking, immune to interferences. 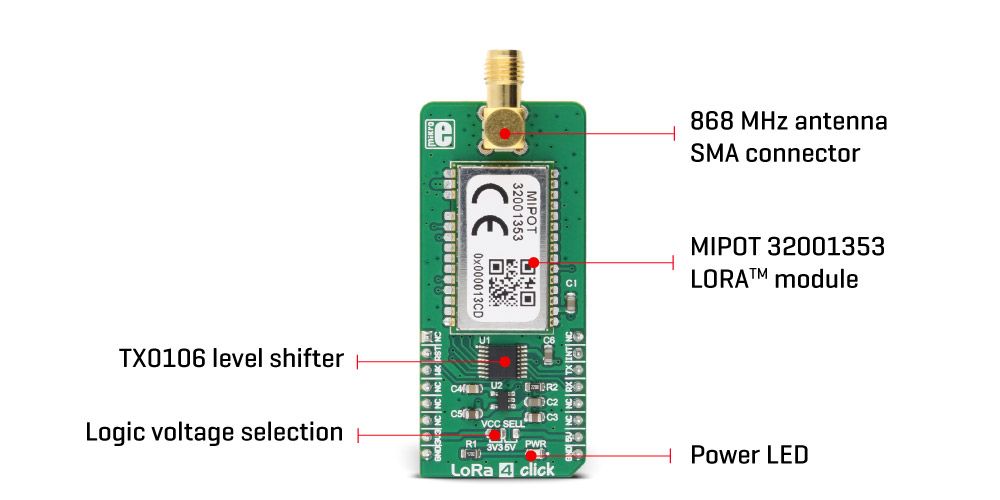 Unlike LoRa 3 click, which can establish a peer-to-peer communication, LoRa 4 click requires a LoRaWAN® concentrator/gateway.To join a LoRaWAN® network, the endpoint device has to use a unique endpoint address, an application session key, and network session key. The first method is called over-the-air activation (OTAA), where these keys are issued after a specific join procedure (more info can be found in the LoRaWAN® specification). The second method is to assign these keys manually, using UART commands. This method is called activation by personalization (ABP) and can be prone to some security issues. In any case, before an end-device can communicate on the LoRaWAN® network, it must be activated.

The communication is done via the UART interface. A communication between the module and the host MCU starts with the MCU pulling the NWAKE pin to a LOW logic state. This will wake up the module, after which the module expects the 0xAA code. This code is a header of every data packet that has been sent or received. After the header, a command code is sent, followed by the payload and the checksum. After a complete packet has been received and its checksum is verified, the module pulls the NDATA_INDICATE (ND_IND) to a LOW logic level. After a short timeout, the data (message) is sent via the UART TX pin of the module, back to the host MCU. At the end of the communication cycle, the ND_IND pin is pulled to a HIGH logic level and the module goes into the sleep mode, waiting to be awakened again by the NWAKE pin. Every command from the host results with a response from the module in the same format, with the command code ORed with 0x80.

To allow interfacing with both 3.3V and 5V MCUs, this click board™ employs the TXB0106, a bidirectional level shifter and voltage translator from Texas Instruments, supported by a 3.3V LDO. This translates the external voltage levels to acceptable levels that can be used on the Mipot LoRa® module. All the I/O pins of the 32001353 LoRa® module are routed via this IC to the mikroBUS™ pins.

The NRST pin is routed to the mikroBUS™ RST pin and it is used to reset the device. It is internally pulled up with a resistor.

The provided LoRa 4 click library offers easy to use functions, which simplify configuration and communication tasks. Their usage is demonstrated in the included example application.

LoRa 4 click board is equipped with an SMA connector so it can be equipped with the appropriate 868MHz antenna. The onboard SMD jumper labeled as VCC SEL is used to select the voltage input for the level shifter for interfacing with 3.3V or 5V MCUs.

This table shows how the pinout on LoRa 4 click corresponds to the pinout on the mikroBUS™ socket (the latter shown in the two middle columns).

Initializes and defines UART bus driver and driver functions which offers a choice to writing on EEPROM, reading from EEPROM, communication with other LoRa® Mipot 32001353 click, but first, we must join to network and a router is needed. Functions also offer a choice to setting and getting channel parameters and getting indications on some executed commands. For more details check the documentation.

void lora4_process() - The function executes reading indications and forwards indications to the handler.

This click board is supported withmikroSDK - MikroElektronika Software Development Kit. To ensure proper operation of mikroSDK compliant click board demo applications, mikroSDK should be downloaded from the LibStock and installed for the compiler you are using.