LoRa 2 click is a LoRa® RF technology based SRD transceiver, which operates at a sub-gigahertz frequency of 915MHz. This click board™ features an embedded LoRaWAN® Class A compliant stack, providing a long-range spread spectrum communication, with high interference immunity. The LoRa® module used on this Click board™ is compliant with the United States (FCC) and Canada (IC) regulations, which combined with the advanced and simple command interface, allows for an easy integration into the final application, reducing development time, costs, and time to market.

LoRa 2 click is a LoRa® RF technology based SRD transceiver, which operates at a sub-gigahertz frequency of 915MHz. This click board™ features an embedded LoRaWAN® Class A compliant stack, providing a long-range spread spectrum communication, with high interference immunity. The LoRa® module used on this Click board™ is compliant with the United States (FCC) and Canada (IC) regulations, which combined with the advanced and simple command interface, allows for an easy integration into the final application, reducing development time, costs, and time to market.

The main active element of the LoRa 2 click the RN2903, low-power long range LoRa® technology transceiver module, from Microchip. It features the Class A LoRaWAN® compliant stack, optimized for a robust LoRaWAN® networking, immune to interferences, and suitable for the long-range wireless operation. It offers a long-range spread spectrum communication with high interference immunity. A receiver with the sensitivity of -146dBm combined with the 18.5dBm integrated amplifier allows for extended range links that can achieve up to 15km in open area (by the module manufacturer specification). LoRa 2 click offers data rates of 300 kbps with FSK modulation and 12500 bps with LoRa® Technology modulation. The radio frequency of the Lora 2 click is located within the 915MHz ISM band, which allows the Click board™ to be used in United States, Canada, Australia and New Zealand. 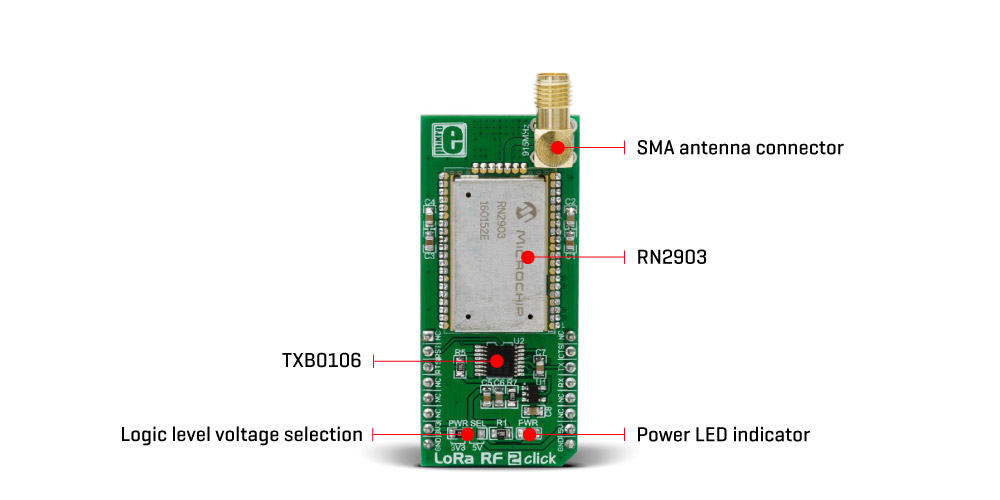 The communication is done via the UART interface. There are three groups of commands, used to configure and operate the separate layers of the RN2903. These layers are the SYSTEM layer, the MAC layer, and the RADIO layer. Each of these layers is controlling a certain area of the module, and every UART command starts with one of the three keywords, which represent an abbreviation of the layer name they are controlling. Some UART commands also require parameters, depending on their nature. For example:

This is a system command that will put the module into a Sleep state for a period forwarded by the <length> parameter (in milliseconds). The module is also equipped with the non-volatile memory (EEPROM) for storing the configuration settings, as well as some additional data. The default UART communication speed is 57600 bps, 8N1 with no hardware flow control enabled.

The break condition can be transmitted to the module if keeping its UART_RX pin low for a period longer than required to transmit a single character. This will interrupt the Sleep mode before the timer expires, also it can be used to sense the communication speed. After the break condition has been signaled to the module, sending character 0x55 will match the communication speed of the module with the speed at which the 0x55 character was sent.

To join a LoRaWAN® network, the device requires a LoRaWAN® concentrator/gateway. The endpoint device has to use a unique endpoint address, an application session key, and network session key. The first method is called over-the-air activation (OTAA), where these keys are issued after a specific join procedure (more info can be found in the LoRaWAN® specification). The second method is to assign these keys manually, using UART commands. This method is called activation by personalization (ABP) and can be prone to some security issues. In any case, before an end-device can communicate on the LoRaWAN® network, it must be activated.

The LoRaWAN® MAC layer can also be suspended by a command, allowing simple p2p (peer-to-peer) communication, where two nodes directly communicate with each other. Although an explanation of all the configuration parameters, as well as the in-depth explanation of each feature of the RN2903 module, can be found in the Command Reference User’s Guide, please note that the improper settings of some parameters might render the device unresponsive. Therefore a care should be taken to read and understand the explanations before applying these settings. To simplify the design and avoid errors, MikroElektronika includes a Click board™ library, which contains simple functions used to set up and operate the LoRa 2 click. The included demo application illustrates how to use them in a real application. It can be used as a reference for the custom design.

To allow interfacing with both 3.3V and 5V MCUs, this click board™ employs the TXB0106, a bidirectional level shifter and voltage translator from Texas Instruments, supported by a 3.3V LDO. This translates the external voltage levels to acceptable levels that can be used on the LoRa® module. All the used I/O pins of the module are routed via this IC to the mikroBUS™ pins.

LoRa 2 click features an SMA connector, so it can be equipped with the appropriate 915MHz compliant antenna. The onboard SMD jumper labeled as VCC SEL is used to select the voltage input for the level shifter for interfacing with 3.3V or 5V MCUs.

This table shows how the pinout on LoRa 2 click corresponds to the pinout on the mikroBUS™ socket (the latter shown in the two middle columns).

The library covers all functionalities of the Click board through simplified API calls.

The full application code, and ready to use libraries can be found on our Libstock page.