As with transistors, diodes are fabricated from semi-conducting material. So, the first letter in their identification is A for germanium diode or B for silicon diode. They can be encased in glass, metal or a plastic housing. They have two leads: cathode (k) and an anode (A). The most important property of all diodes is their resistance is very low in one direction and very large in the opposite direction. When a diode is measured with a multimeter and it reads a low value of ohms, this is not really the resistance of the diode. It represents the voltage drop across the junction of the diode. This means a multimeter can only be used to detect if the junction is not damaged. If the reading is low in one direction and very high in the other direction, the diode is operational. When a diode is placed in a circuit and the voltage on the anode is higher than the cathode, it acts like a low value resistor and current will flow. If it is connected in the opposite direction it acts like a large value resistor and current does not flow. In the first case the diode is said to be "forward biased" and in the second case it is "reverse biased." Figure 5.1 shows several different diodes:

The diodes above are all single diodes, however 4 diodes are available in a single package. This is called a BRIDGE or BRIDGE RECTIFIER. Examples of a bridge are shown in the diagram below:

You must be able to identify each of the 4 leads on a bridge so that it can be inserted into a circuit around the correct way. The surface-mount device above is identified by a cut @ 45° along one side. The leaded bridge has one leg longer than the others and the top is marked with AC marks and "+." The high-current bridge has a corner cut off and the other surface-mount device has a cut or notch at one end. These devices are added to a circuit as shown in the next diagram:

The 4 diodes face the same direction and this means a single diode can be shown on the circuit diagram:

Symbols in 5.2 show a number of diodes. There are a number of specially-designed diodes: for high current, high-speed, low voltage-drop, light-detection, and varying capacitance as the voltage is altered. Most diodes are made from silicon as it will withstand high temperature, however germanium is used if a low voltage-drop is required. There is also a light emitting diode called a LED, but this is a completely different type of diode.

LEDs (Light Emitting Diodes) are constructed from a crystalline substance that emits light when a current flows through it. Depending on the crystalline material: red, yellow, green, blue or orange light is produced. The photo below shows some of the colours hat can be produced by LEDs: 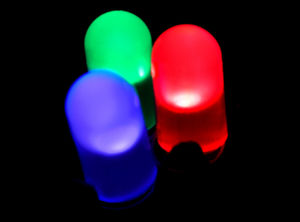 It is not possible to produce white light from any of these materials, so a triad of red, blue and green is placed inside a case and they are all illuminated at the same time to produce white light. Recently, while light has been produced from a LED by a very complex and interesting process that can be found on Wikipedia: http://en.wikipedia.org/wiki/LED LEDs have a cathode and anode lead and must be connected to DC around the correct way. The cathode lead is identified on the body by a flat-spot on the side of the LED. The cathode lead is the shorter lead.

One of the most important things to remember about a LED is the characteristic voltage that appears across it when connected to a voltage. This does not change with brightness and cannot be altered. For a red LED, this voltage is 1.7v and if you supply it with more than this voltage, it will be damaged. The easy solution is to place a resistor on one lead as shown in the diagram below:

The LED will allow the exact voltage to appear across it and the brightness will depend on the value of the resistor. Zener diodes (5.2c and 5.2d) are designed to stabilize a voltage. Diodes marked as ZPD5.6V or ZPY15V have operating voltages of 5.6V and 15V. Photo diodes (5.2e) are constructed in a way that they allow light to fall on the P-N connection. When there is no light, a photo diode acts as a regular diode. It has high resistance in one direction, and low resistance in opposite direction. When there is light, both resistances are low. Photo diodes and LEDs are the main items in an optocoupler (to be discussed in more detail in chapter 9). Tunnel diodes (5.2f and 5.2g) are commonly used in oscillators for very high frequencies. Schottky diodes (5.2h) are used in high frequency circuits and for its low voltage drop in the forward direction. Breakdown diodes (5.2i) are actually Zener diodes. They are used in various devices for protection and voltage regulation. It passes current only when voltage rises above a pre-defined value. A Varicap diode (5.2j) is used instead of a variable capacitor in high frequency circuits. When the voltage across it is changed, the capacitance between cathode and anode is changed. This diode is commonly used in radio receivers, transceivers and oscillators. The cathode of a low power diode is marked with a ring painted on the case, but it is worth noting that some manufacturers label the anode this way, so it is best to test it with a multimeter. Power diodes are marked with a symbol engraved on the housing. If a diode is housed in a metal package, the case is generally the cathode and anode is the lead coming from the housing.