Resistance value is marked on the resistor body. Most resistors have 4 bands. The first two bands provide the numbers for the resistance and the third band provides the number of zeros. The fourth band indicates the tolerance. Tolerance values of 5%, 2%, and 1% are most commonly available. 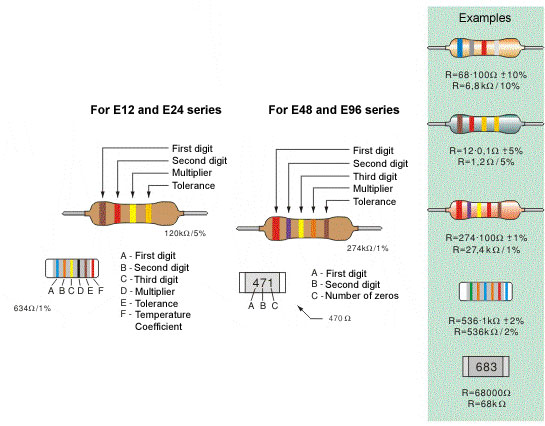 Common resistors have 4 bands. These are shown above. First two bands indicate the first two digits of the resistance, third band is the multiplier (number of zeros that are to be added to the number derived from first two bands) and fourth represents the tolerance.

Marking the resistance with five bands is used for resistors with tolerance of 2%, 1% and other high-accuracy resistors. First three bands determine the first three digits, fourth is the multiplier and fifth represents the tolerance.

Some SMD resistors are made in the shape of small cylinder while the most common type is flat. Cylindrical SMD resistors are marked with six bands - the first five are "read" as with common five-band resistors, while the sixth band determines the Temperature Coefficient (TC), which gives us a value of resistance change upon 1-degree temperature change.

The resistance of flat SMD resistors is marked with digits printed on their upper side. First two digits are the resistance value, while the third digit represents the number of zeros. For example, the printed number 683 stands for 68000W , that is 68k.

For some electrical circuits, the resistor tolerance is not important and it is not specified. In that case, resistors with 5% tolerance can be used. However, devices which require resistors to have a certain amount of accuracy, need a specified tolerance.